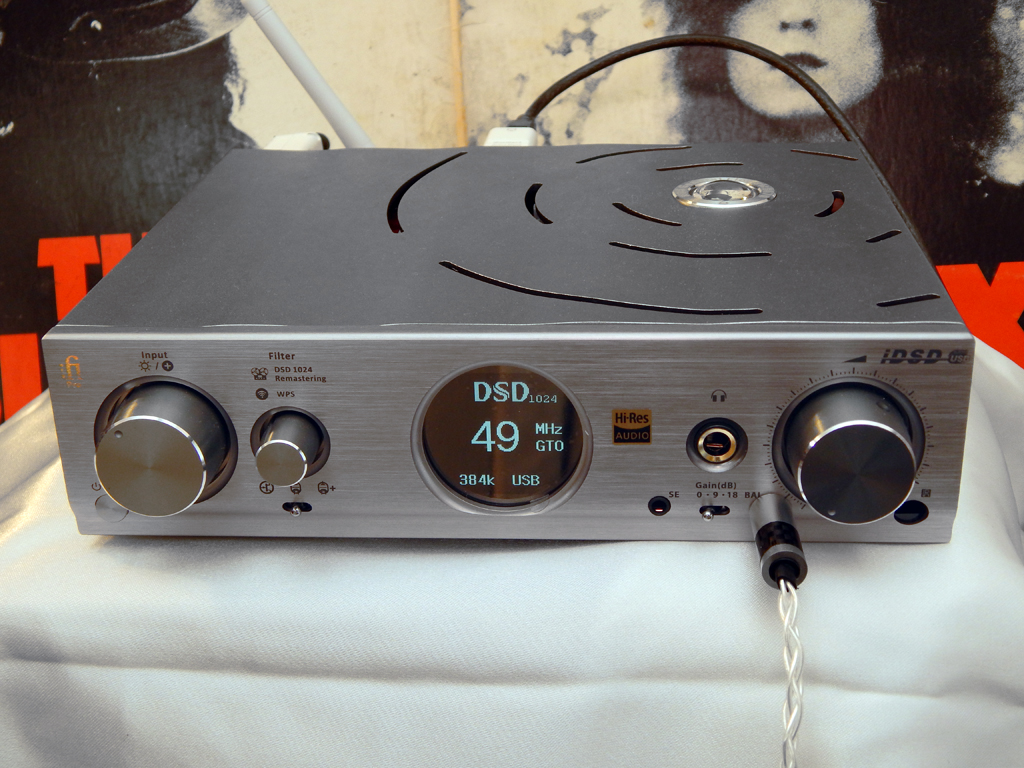 At $2,749 the iFi Pro iDSD 4.4 is rather inexpensive for a reference DAC with many other offerings running between $10K and $15K, but in all other respects, it certainly fits the bill. Being designed as a Pro-Audio piece, as well as , it offers decoding of DSD 1024 as well as such exotic options as AES/EBU digital input and Atomic Clock external sync, but what truly sets it apart is the ability to choose between J-FET solid-state or triode tube analog stage.

Established in 2012 and based in Southport, UK iFi is a forward facing company who strives to remain on the bleeding edge of technology while providing significant improvements to sound at an affordable price. Because of this, they produce a lot of ancillary products, two of which will be used in this review; the iFi iPurifier3 and the iFi DC iPurifier2, because every bit of noise reduction that takes place outside of the analog signal path means lower noise floor and higher resolution with no degrading compromises (as long as current availability is not reduced).

Ok, the list of features for the iFi Pro iDSD 4.4 is fairly long, so bear with me:

As with most iFi products, the appearance of the iFi Pro iDSD 4.4 is elegant, simple, compact and unique. The chassis is heavy gauge aluminum with a wavy surface and circular vents center on a small lens in the top (right rear corner) for the tubes. The front panel houses the power button, a large input select knob, a smaller filter select knob (push for WPS) below which is the amplifier select switch, the OLED display, the 3.5mm single-ended headphone output, the gain switch above which is the ¼” single-ended headphone output, the 4.4mm balanced output, a large volume knob (which automatically returns to the last listening volume when turned on), and the remote eye.

Lastly, before we get to actual testing, there is one more feature that I haven’t actually covered, and that is there are three different modes for digital processing:

I usually don’t talk about packaging with components, because, well they usually come in a box with foam inserts and that’s about it. Not so with the iFi Pro iDSD 4.4. It came in a virtual Russian doll of nested secret compartments, boxes and accessories. When you first open the elegant white box with an embossed silver iFi logo and outer picture sleeve you find the iFi Pro iDSD 4.4 nestled in simple foam enclosure as you would expect, but once you pull the unit out, you discover a secret compartment below that is subdivided into three separate compartments, one of which houses the user manual (and warranty card) and the other two contain plain white boxes imprinted with the iFi logo (white on white). In the larger of the two you find the power supply and power cord, and the other contains a USB 3 cable, a set of RCA interconnects, an optical cable adapter and the WiFi antenna.

Burn-in introduced the interesting question of how best to accomplish it, especially considering that there were two separate amplifiers. I began by connecting to WiFi (WPS made this almost instant) and Ethernet, then installing MUZO on my FiiO X7mkII and streaming Qobuz Playlists, but finally settled on simply running the S/PDIF out of the X7mkII into the iFi Pro iDSD 4.4 as requiring less monitoring. With burn-in and the intervention of RMAF, the iFi Pro iDSD 4.4 was my primary DAC and Headphone Amp for several weeks, thus we became fast friends.

I started my critical listening with my MrSpeakers ETHER2 Orthodynamic Headphones and Qobuz. I want to talk about the digital filters first. Usually the effect is rather subtle, not so with the iFi Pro iDSD 4.4, there was a clear sonic difference. While Gibbs Transient Optimised was the most musical to my ears of the basic filters, the DSD – Remastering took the sound to a whole new level as exemplified by Ian Stewart’s “Rap City in DA Nile (feat. Mr Lif)” (16/44.1kHz – Ian Stewart & Jackson Whalan – “These Aren’t The Words You’re Looking For….”). Everything just opens up, tighter focus on the individual instruments.

Even tracks originally recorded in DSD simply had more air and a more liquid sound. Even in the solid-state mode the midrange was honeyed listening to “Dear Diary” by The Moody Blues (DSD – “On The Threshold Of A Dream”). The timbre of the instruments was so natural you could easily differentiate between the Mellotron and the real flute playing in conjunction. Same was true of the acoustic guitar and bass guitar picking out the same bass line. The soundstage was large studio with closed mic’d instruments.

The musicality of the DAC with the solid-state amplifier was such that there was very little expected change switching over to the tube amp. I don’t think I’ve heard a more realistic soundstage presentation than that presented by “Everybody Loves Somebody” (Dean Martin – 24/96kHz – “Everybody Loves Somebody”). Following the suggestions of the manual (listening volume should fall in the mid-volume range), I set the gain to +9dB. The dynamic range was amazing in a large hall atmosphere. Dean’s voice caressed me with that deep baritone burr, and the strings were rich and full, while the backup chorus was angelic.

Changing over to my reference headphones the MrSpeakers ETHER C Flow 1.1 Planar Magnetic Headphones and the balanced output to enjoy “The Firebird Suite” as performed by Robert Shaw and the Atlanta Symphony Orchestra (16/44.1kHz – “Stravinsky: The Firebird; Borodin: Music from Prince Igor”) I experimented with the “Tube+” mode, but quickly retreated to the chill inducing standard tube mode as there was plenty of power to run the ETHER Cs and the experience was simply magical.

To check out the performance of the iFi Pro iDSD 4.4 with dynamic headphones I plugged in the Spirit Torino Twin Pulse Isobaric Open Circumaural Headphone and set the gain back to 0 and cued up Meiko’s MQA cover of “Zombie” (16/44.1kHz MQA – “Playing Favorites”) and was transported to spacious theater, the cello resonant and thick.

I next connected the iFi Pro iDSD 4.4 to my reference amplifiers (2 Questyle CMA 800 R Current Mode Headphone Amplifiers in full balanced mono mode feeding the ETHER Cs) and put on “The Song Is Over” (DSD – The Who – “Who’s Next”). Whether in solid-state or in tube mode, this was one of the most musical DACs I have tested though frankly I can’t think of a situation where I would use an external headphone amplifier as the iFi Pro iDSD 4.4 had no problem driving anything I connected to it.

The iFi Pro iDSD 4.4 hits on all cylinders. As a DAC it is unparalleled in versatility and sound to my ear. The fact that it offers a triode tube analog section as well as a separate Class A discrete solid-state analog section puts it in a class by itself. As a DAC by itself, I would have no problem using this as a reference DAC, it is exceptionally musical, with an excellent but realistic soundstage, and it handles all existing digital formats. It has a wide range of digital filter options allowing the user to tailor the sound to their specific tastes, but no setting in my experience was particularly harsh or grainy.

As a headphone amp, it leaves little to be desired also, again offering the option of tube or solid-state, providing sufficient oomph to drive just about any headphone, so unless you are looking for a particular color to your music, it is a one stop shop at a fairly reasonable price.