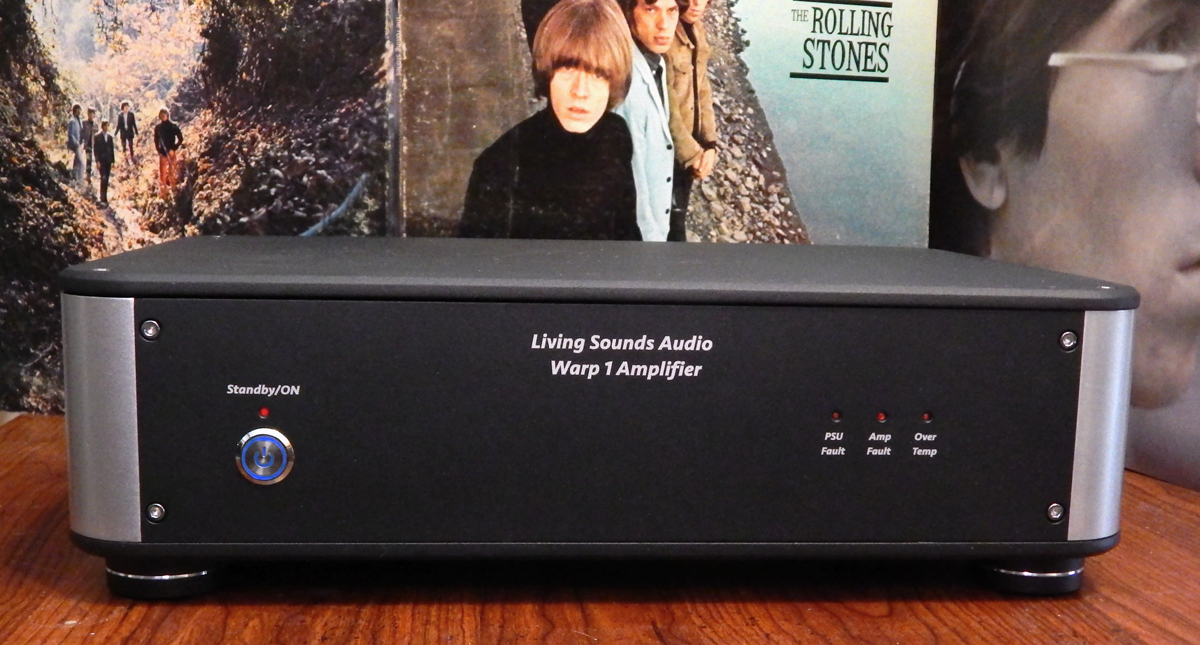 Living Sounds Audio (LSA) has really brought Class-D amplification to a new level with their epic LSA Discovery Warp 1 which is rated at 150 Watts per channel into 8Ω and 250 Watts into 4Ω, is stable down to 2Ω. Furthermore, the Warp 1 has a prodigious peak current output of 17 amps per channel. All of this power out of a small 14″ wide x 10″ deep x 3″ high package with distortion as low as 0.0027% and a stunning 115dB Dynamic Range and -119dBV noise floor. As you can guess, when Walter Liederman of Underwood HiFi offered to ship me a review sample to test out, I jumped at the chance.

Class-D amplifiers, often referred to as Digital amplifiers though this is not strictly correct, were originally relegated to use in subwoofers due to a lack of fidelity in the midrange and especially in the higher frequencies, and anyone who has heard a cell phone or DAP with Class-D amplifiers will understand why. Over the last twenty years, great strides have been made in Class-D amplification, and while they are most popular in the portable market, they have also worked their way into a lot of high-end audiophile amplifiers for the two-channel and multi-channel loudspeaker market. The primary advantage of Class-D is efficiency (IE: they can produce high levels of power with relatively low levels of power loss through heat radiation), which explains why they are so popular in Personal Audio as this translates into longer battery life and higher power outputs. In the loudspeaker arena, this means smaller lighter higher-powered amplifiers (most of the weight of a conventional solid-state amplifier is the heat sinks and transformers which are greatly reduced in size in a Class-D amplifier, which in turn reduces the manufacturing costs). So the ability to produce a musical Class-D amplifier is the holy grail for high-end audio manufacturers, and this is a role the Discovery Warp 1 excels at.

Like all of LSA’s products, the LSA Discovery Warp 1 is simple elegance in appearance with clean modern lines. The chassis is made up of 10 discrete pieces of aluminum, a flat top and bottom panel with rounded corners and edges, flat front, back, and side panels (2) held together by four curved corner pieces using countersunk Allen head bolts. The brushed aluminum corner pieces create a striking contrast to the dark grey anodized faces. Rubber O rings are inset into the four aluminum feet providing excellent isolation and of course protecting supporting surfaces. The front is adorned with a single chromed power button (backlit blue when on) and four LED lights; Standby/ON (lights red when the master power switch on the back is engaged), PSU Fault, Amp Fault, and Over Temp (note, the Amp Fault will flash once when powering down). On the back, there is a backlit master power switch above the power receptacle, four five-way binding posts for the right and left outputs, two single-ended RCA inputs, and two XLR balanced inputs (note single-ended inputs are automatically defeated when XLRs are inserted), and a reset button.

The Warp-1 amp utilizes the class-leading Texas Instruments TPA3255 “Purepath” Class D amp Reference Design as initial inspiration, with extreme care in the layout design and choice of high-performance componentry to ensure that the amp operates at its true potential. The state-of-the-art PCB layout was made using double planes stitched together with thousands of vias wherever an ultra-low impedance path was needed.  This was done to ensure extraordinary signal transfer and maximize Music and Dynamic Contrasts. Special attention was paid to keep current loop areas as small as possible and Power input paths were kept as short as possible as well.  Signal integrity was primary focus here paying specific attention to these parameters to yield phenomenally low noise for Blacker Blacks and a Deep Soundstage.

The ground paths were designed with a star hub topology (note that the power entry jack is in the middle of the board).  Ultra-high current low distortion CoilCraft flat copper wire SER shielded inductors for the output filter provide unfettered current flow while ensuring the minimum in distortion.  The PCB is an extra thick 2mm FR4 with 2oz (70um thick) copper traces and electroless nickel immersion gold (ENIG) finish. A custom-made oversized 600w state-of-the-art low-noise switch mode power supply and buffer preamp provide the amplifier with an abundance of power on-tap without a hint of hesitation.

The Warp-1also has a custom-made signal input buffer that accepts either balanced (XLR/TRS) or single-ended (RCA) sources that utilizes state-of-the-art Texas Instruments OPA1656 operational amplifiers for signal conversion and amplification.  The buffer has a DIP switch that allows selectable gains from 0dB, 6dB, 14dB, and 20dB to match any source.   The TPA3255 amp has an intrinsic 22dB of gain plus the setting from the factory of 6dB for an overall 28dB gain.

Living with the LSA Discovery Warp 1:

I began my serious listening with my burn-in setup which was made up of the LSA Discovery Warp 1 driving a pair of Mission speakers with my iFi Pro iDSD via the balanced inputs as source and my FiiO M11 acting as music server. Cabling was all Cardas Iridium including the power cords which were connected to a Core Power Technologies A/V Equi=Core 1000 (review pending). Choosing “Carole King & James Taylor Live at the Troubadour” (24-bit/96kHz – Qobuz) three things were immediately evident, the astonishing noise floor, the strong presence in the midrange and bottom end (usually a weak point in Class-D amplifiers), and the extreme musicality, offering up a stage-side experience in my listening room. One odd quirk of the recording is that the audience felt farther away than the band one drawback of taking your recording off the sound system rather than setting up dedicated mics.  I was able to correct this a bit by switching which end of the room the speakers were set up to increase rear wall reflection, but while this made the band feel even more like they were in the room, the audience was still in front of me.

Looking for something with a larger presentation I switched to “Here Comes the Flood” (DSD) by Peter Gabriel from his self-titled first solo album. This gave me excellent depth of field in the sound stage due mostly to the inky blackness of the noise floor and thrilling dynamics. Once again the tonal balance was exactly what I was looking for.

Figuring it was time to scale up I switched to my reference units; an Audio-gd R2R-1 DAC via single-ended Cardas Iridium RCA interconnects through my Manley Absolute Headphone Amplifier as preamp. The musicality was kicked up several notches listening to Jaco Pastorius’ “Portrait of Tracy” (“Jaco Pastorius”- DSD), with the timbre of his bass coming across as live even through a set of mini-monitors.

Not totally satisfied with the sound of the Missions I broke out my prototype non-resonant, bipolar, point source speakers (this required a quick rewire of the speakers to accommodate the Cardas banana plugs as my cat had eaten the original wires which was why the speakers were in storage). As these are prototypes, only I know what they sound like, but that was fine for my purposes and you can think of them having a similar sonic profile to planar speakers. Cueing up The Rolling Stones “As Tears Go By” from their “Big Hits (High Tide And Green Grass)” album (DSD) I was suddenly in the room with a very young Mick and Keith as they performed this epic ballad. There is no other way to describe it, everything was perfect and realistic, from the plucking of the steel guitar strings to the timbre of Mick’s voice to the gentle whine of the orchestra in the background. I’ll point out that these are very demanding speakers both tonally and power-wise (about 81dB/1W efficiency). One of the first amplifiers that I tested them with was an extreme high-end Class-D amplifier costing a magnitude more than the Warp 1 and I was sorely disappointed eventually opting for a prototype Class-A Current Mode amplifier which I had to return when I moved, another reason the speakers were in storage.

As a final listening test, I put on my go-to classical recording “The Firebird Suite” as performed by Robert Shaw and the Atlanta Symphony Orchestra (“Stravinsky: The Firebird; Borodin: Music from Prince Igor” – 24-bit/96kHz vinyl rip) and I was transported to the Hollywood Bowl with an expansive soundstage and every musician in their place stapled to their chair. The musicality of the Warp 1 was wonderful, unbelievable for an amplifier in its price range forget the Class-D caveat.

Something of note to those planning to purchase a Warp 1 though it has no bearing on the performance of the unit. Setting up the LSA Discovery Warp 1 I learned a few things that are important to know and aren’t necessarily obvious. Do not turn on the Warp 1 without the inputs connected to an active source. While this won’t harm the unit, it did cause me quite a bit of frustration. In general, it is always best to turn on the amplifier last in any component system as you can often get loud popping noises from preamps and DACs as they power up, but the Warp 1 actually counts on the grounding of the interconnects to the source. This is my tale of woe and take it as a caution in setting up; to do my initial burn-in I connected the Warp 1 to a pair of Mission speakers via Cardas Iridium speaker cables, and my Audio-gd R2R-1 DAC via single-ended Cardas Iridium RCA interconnects using my Schiit SYS passive controller as volume control (with the intention of using my Manley Absolute Headphone Amplifier as preamp for the actual review). I then connected the Warp 1 and R2R-1 to the Core Power Technologies A/V Equi=Core 1000 and turned everything on. Unfortunately, I had the SYS set to the wrong input which meant the Warp 1 was essentially connected to an open input which caused a loud hum. My first step was to bypass the Equi=Core 1000 which significantly increased the noise level. Eventually, I connected the Warp 1 to my iFi Pro iDSD via Cardas Iridium XLR balanced cables and this eliminated the noise and I was able to continue burning in the amp and then after consulting Viet Nguyen the amp’s designer, who was very helpful, I was able to discover the cause of the issue, though oddly enough once I got single-ended to work, I was not able to replicate the original circumstance.

Conclusions on the LSA Discovery Warp 1:

The Living Sounds Audio Discovery Warp One Stereo Amplifier, simply put,  is the best sounding Class-D amplifier I have ever heard, and this is from someone who once worked for the company that made the first High-End Class-D amplifier. With its musicality, power, linearity, abyssal noise floor, exciting dynamic range, and excellent three-dimensional soundstage it is one of the best if not the best, amplifiers in its price range full stop. All of the traditional drawbacks of Class-D, brittle highs, thin mids, and low current leading to anemic bottom end are missing from the Warp 1. Though I generally prefer low-gain amplifiers to avoid gain noise, at the factory set +6dB setting with the gear I used the system was absolutely silent though this was likely in no little part also due to the benefits of the Core Power Technologies A/V Equi=Core 1000, still overall stellar performance, and given the speakers used sit in the 81dB/1W range in efficiency, I can’t see any reason why anyone would need the higher gain settings. All of which leaves me with a full thumbs up wholehearted recommendation.

Over Temperature Detection and Protection