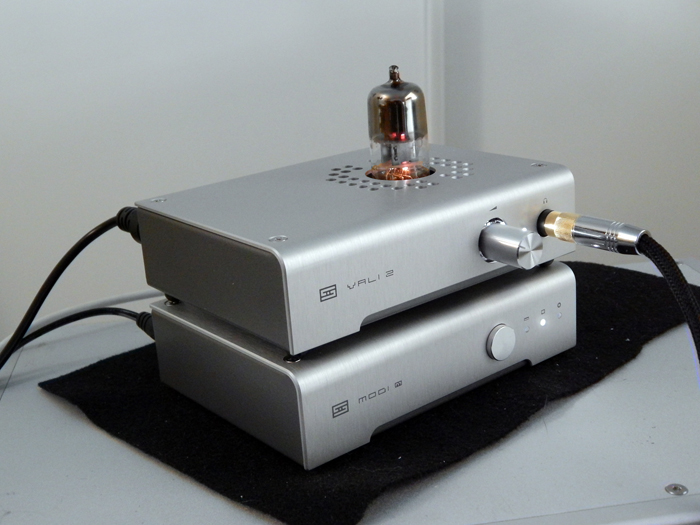 When Schiit offered me their new updated Schiit Yggdrasil Analog 2 Multibit DAC for review, they asked what else I would like to review, and I had to sit back and think a bit as they have a fairly large line. So I went to their website and looked over their product offerings and what caught my eye were the Schiit Vali 2 Tube Hybrid Headphone Amplifier and the Schiit Modi Multibit DAC. I was completely intrigued by the idea of a $149 tube amplifier. I mean, it was cute because of its tiny size and single tube, but as an entry level piece you don’t expect much other than novelty, but it is a tube amp designed by Jason Stoddard, how bad could it be? And the obvious match was the Mike Moffat designed Modi Multibit, could the essence of the Yggy be boiled down to such a tiny package? It was all a challenge which I could not pass up, especially the budget audiophile deep within me who yearned for this to be epic. But as I often like to say, Life Intervened, it has been a busy new product season, and there was the launch of the Schiit Lyr 3 which also took precedence, and the wonderful folks at Schiit have been so accommodating and not demanded the return of their little gems, so I have had several months to live with these small wonders, occasionally using them for other reviews, and now they will get their full due.

Why Multibit? Yes you can get a Modi for $99 with a perfectly respectable AKM AK4490 sigma-delta DAC, but it’s the equivalent of buying a Ferrari with sedan tires, if you’re not getting Multibit, you’re not getting the full Mike Moffat Schiit experience. The Modi Multibit is the end product of over 30 years of Multibit designs since Mike made the first enhanced resolution DAC in the eighties. And again, why Multibit, because PCM is Multibit, while sigma-delta can approximate PCM, the “add a bit, subtract a bit” can’t actually hit dead on. Now if you are a strictly DSD kinda person, then sigma-delta is the way to go, but if you are like me (and I have 8TB of DSD) the majority of your digital music is PCM, after all, almost all music produced after the mid eighties was recorded in PCM.

So what does the Modi Multibit offer in terms of features? Well let’s start with DC-coupled output, after all a DAC is only as good as its analog section, Schiit’s exclusive closed-form digital filter, and non-oversampling playback of 24/176 kHz and 24/192 kHz signals, again to reduce timing errors (which is what high resolution is all about). It also employs an outboard power supply for better isolation. For mechanical features, the Modi Multibit has switchable USB, Coax and Toslink inputs and single ended RCA outputs. And to put icing on the cake, it is made in Valencia, CA USA, not just final assembled, but everything from the chassis to the circuit boards, only the components themselves are sourced outside the US, and regardless of what you may have been led to believe, this means higher quality control.

The Modi Multibit has the same elegant molded aluminum chassis design as all of their products with a single selector button on the front and a toggle power switch on the back (implying that it is meant to be left on), except that it is tiny, about the size of a pack of cigarettes.

The Schiit Vali 2 uses a unique, class-leading power supply that provides 60V on the plate along with a fully discrete, current-mode noninverting hybrid topology. Its unique single tube (using a balanced pentode tube as a dual triode tube) design along with auto biasing makes tube swapping incredibly easy by eliminating the need to match tubes, and was one of the things that attracted me to the Vali 2. The use of an external power supply means an unbelievably low noise floor, which we’ll get into more thoroughly in the sonic tests.

The appearance of the Vali 2 is identical to the Modi Multibit except for the tube protruding through the top and the volume control knob as opposed to input selection switch, plus the gain switch on the back.

The listening tests for the Schiit Vali 2 Tube Hybrid Headphone Amplifier and the Schiit Modi Multibit DAC were unusual because I have had a couple of months of listening to fall in love with the petite combo, so I already knew much of what I was going to say before I even started writing this review. My normal modus operandi is to burn in for a week, then spend a couple of days in passive listening while I write background material for the review, and then go back and select specific tracks to solidify what I am hearing. With the Modi Multibit and Vali 2 it was more a matter of solidifying observations than developing impressions.

Noise floor; I usually don’t do this, especially with a desktop system, but I started with my Noble Katana IEMs to test the noise floor. With everything else I used on the system, including the Echobox Nomad IEMs, which are extremely efficient, the noise floor was inky black even in the “High” gain mode, but the Katanas are the most sensitive IEMs I have ever listened to. While not as quiet as the Schiit Lyr 3, the baseline noise floor was unbelievably low, incredibly so considering it is a tube amp, in fact the lowest of any tube amp I’ve tested other than the Lyr 3. I should note that the noise floor varied slightly depending on which tube I used (more on this later).

Listening to “The Firebird Suite” (Robert Shaw and the Atlanta Symphony – 16/44.1) through the Katanas, gave me a chance to evaluate tonal balance which is exceptionally linear dipping deep into the bass and extending well into the high frequencies.

Stereo separation; another unexpected factor of the Vali 2 was channel crosstalk, or the lack there of, equal to most of the dual mono systems I have listened to, which is surprising given the use of a shared tube. The multiple guitars and various incidental background sounds of Pink Floyd’s “Wish You Were Here” (24/176.4 kHz) were precisely placed creating a totally immersive soundstage played back through the MrSpeakers ETHER C Flow Orthodynamic Headphones.

The precise timing of the Multibit digital processing came through elegantly while playing Pink Martini’s rendition of “Que Sera, Sera” (16/44.1) building a huge ethereal sound stage with the interplay between the rich piano, and the bells, triangles, cymbals and chimes, yet the honeyed midrange magnificently portrayed the vocals and horns.

Selecting the MrSpeakers AEON Flow Open Headphones as a more economically compatible headphone, I put on “Somebody to Love” by Queen (16/44.1) for a little pop gold, the bass and percussion were fast, deep and lush. Given the low noise floor, the dynamic range and separation were excellent, and Freddie’s vocals were spine tingling.

Stepping down even further, I broke out my budget headphones the 1MORE Triple Driver Over-Ear Headphones and cued up Jaco Pastorius and “Portrait of Tracy” (24/176.4 kHz). The harmonics were crisp and almost bell like, while the bass was resonant yet tight.

Like many Personal Audio enthusiasts, I began my love of audio as a hobbyist, albeit at the dawn of time in the dark ages known as the 50s. As mentioned earlier, one of the attractions of the Schiit Vali 2 Tube Headphone Amplifier is the ability to switch tubes, thereby changing the characteristics of the amplifier, and it was with this in mind that I broke out my box of tubes and did some experimentation. With a little research I was able to find three tubes that were compatible. I expected minor changes in tonality, but not to the extent I experienced, it was a gas. The Vali 2 came with a New Old Stock, Canadian Philco 6BQ7A. The tubes I tried were a Yugoslavian ECC-88 circa late 80’s, an American made RCA 6FQ7 vintage 50s-60s and an American made Tung-Sol 6FQ7 vintage 50s. The ECC-88 was similar to the Philco, though a little more anemic and analytical which was not unexpected. On the other hand, the 6FQ7 was a little sweeter and had a deeper bass extension. While the RCA and the Tung-Sol were very similar, the Tung-Sol exhibited the lowest noise floor.

What it all Means:

The Schiit Vali 2 Tube Hybrid Headphone Amplifier and the Schiit Modi Multibit DAC were one of the more enjoyable systems to come across my desk. There is almost a perfect synergy between the two pieces. The musicality of the Vali 2 takes the edge off of the sharp accuracy of the Multibit DAC, without compromising tonal balance, detail or soundstage.

I have no problems saying that the Schiit Modi Multibit DAC is the best sounding budget DAC I have heard, it will definitely beat out anything in the sub $500 category and compete favorably with many DACs in the thousand dollar plus group. This is with the caveat that it is PCM only and that it needs be coupled with a very musical amplifier.

But, the real diamond here is the Schiit Vali 2. If you have not heard a proper tube amp, you owe it to yourself to do so. The Vali 2 is incredibly musical, providing a sweet mid range, deep authoritative bass, unrestrained highs, excellent dynamic range and detail, with an exceptionally low noise floor, and the power to drive most headphones without issue. Is their a better tube amp out there, well the Lyr 3 comes to mind, but at three times the price. The Vali 2 is a personal indulgence, a guilty pleasure if you will, I would go so far as to say that if you don’t have a tube amp in your collection, buy a Vali 2, for a $149, how could you go wrong, and you will add a dimension to your music enjoyment hitherto unexplored.