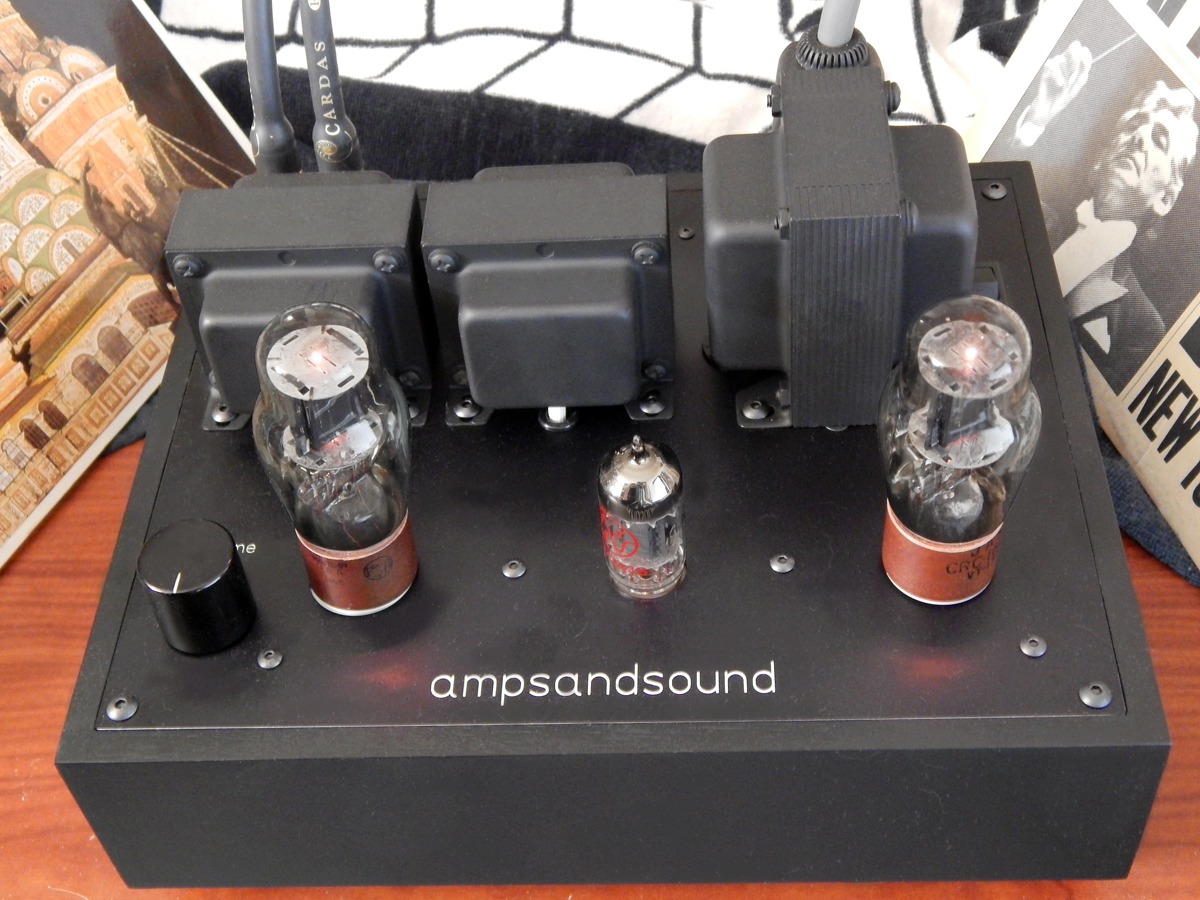 I have made it no secret that I am a huge tube fan. I have also made no secret of my love of ampsandsound amplifiers. The reason is that Justin Weber is one of the few designers of his generation that gets what tube amps are all about and almost more importantly, knows what music is supposed to sound like. What tubes are all about is musicality, and in this context, musicality means dynamic, open, natural-sounding, clear, resolute, linear, organic sound without the added hard edge produced by solid-state amplification. (I have stressed this often, but what tubes are not about is rolled off highs, anemic bass, and supposed pleasantness of high THD as is the misconception of modern non-audiophile engineers.) So it was with no little excitement that I greeted the news that I would be given the opportunity to review the newest revision of the amp that started it all (as far as headphone amps anyway) the ampsandsound Kenzie OG Rev 2.

The original Kenzie was great so the first question that comes to mind is, why redesign? There are two basic reasons why one would decide to redesign a popular product like the Kenzie, necessity, and serendipity. The change from the octal input tube to a nine pin solution was due to the diminishing availability of NOS (New Old Stock) octal tubes, so by switching to a nine pin, not only is the noise floor dropped significantly, the power output increased, and the bandwidth widened, but the selection of tubes becomes greatly enhanced allowing the user to roll tubes to fine-tune tailor the sound to their particular preference (the unit I received was fit with a JJ ECC803S which is said to be thicker and more harmonically complex than the 12AX7).

Serendipity comes into play with the selection of the 1626 output tube, a WWII-era tube that was used as a transmitter tube in radar installations. Despite being a little shy on pure output, the 1626 offers layers of texture and drive, and paired with a massive choke and robust output transformers provides ultra-quiet operation (the review unit was fit with a pair of RCA CRC-1626/VT-137 tubes).

Like all of ampsandsound’s amazing products, the Kenzie is handmade in Southern California with U.S.-sourced parts and custom hand-wound output transformers. Justin had me open the chassis to see how much care is taken in the manufacturing, each unit hand-assembled by a single craftsman.

A tad smaller than the original Kenzie, the Kenzie OG Rev 2 has a beautiful Wood Chassis (dimensions:10.75″ Wide x 8.75″ Deep).

My first thought when I received the tiny pelican-style case containing the ampsandsound Kenzie OG Rev 2 was “Did I get the right thing?”, but upon opening, sure enough inside the case which was about the same size as my Dekoni Headphone Hero case was the Kenzie. I also assumed that the travel case was just for the review sample, but Justin assured me that all of his amps come in pelican-style road cases. I also loved the small footprint of the Kenzie which Justin intentionally kept small despite filling it with larger components so that users wouldn’t be overwhelmed with a huge presence on their desktop. This necessitated locating the inputs and outputs towards the back behind the transformers but I thought the smaller chassis was well worth the sacrifice of what was in truth not really an inconvenience.

My initial listening tests of the Kenzie OG Rev 2 were performed using the Focal Clear Mg dynamic headphones for the review of said headphones. My first impressions were extreme silence and massive power (I never turned the volume over ¼ attenuation). The Kenzie transformed a headphone that was a bit enthusiastic and muddled on the bottom end and hard on the top end into a truly musical contender, with a large soundstage and tactile detail.

To begin serious listening I chose my trusty standby the Dan Clark Audio ETHER2 planar magnetic headphones and cued up Christian McBride & Inside Straight’s “Live at the Village Vanguard”(24-bit/96kHz – Qobuz) on Qobuz. Set amidst the audience in a large club, the vibes were crisp and clear up front slightly off stage center to the right with the piano rich and full to the left of stage, while the upright bass tight and commanding was set back center stage and the drums behind the vibes with snap and impact. The saxophone came across smooth and meaty with just enough brass to sound real standing between the bass and piano. The recording captured the sound of the Village Vanguard with the applause both in front and behind you. Even turning the volume up to live performance levels the sound was musical and magical with a tonal balance so natural that it didn’t even come to mind.

Switching to my HiFiMan HE6se Orthodynamic headphones I selected “Non Mi Lasciare” (16-bit/44.1kHz) by Dario Baldan Bembo for a picture of the Kenzie’s handling of vocal and subsonic bass. Even these massively power-hungry headphones required less than half volume to achieve operatic levels of sound. The bass was deep and resonant while still well-controlled and full of tonality. Dario’s dynamic vocal was velvety and textured yet intimate in a large auditorium, while the piano had weight with clear natural harmonics.

While my next test is not recommended given the extreme power of the Kenzie, but I had to see how far that noise floor goes, so I broke out my beloved Noble Katana CIEMs. While there was a baseline tube hum, it was well below what I get with most solid-state desktop amps. Even with the volume all the way down I could hear “Crime Of The Century” (Supertramp – “Crime Of The Century” – 24-bit/96kHz) once the track started, moving to what I think of as the first notch gave me maximum acceptable volume. The Steinway had incredible detail and dynamics in a vast soundstage with solid pervasive abyssal sound from the bass guitar, and snap and impact from the percussion while the strings could be envisioned as individual instruments and the saxophone was smooth and plush.

Next on the docket was my reference dynamic headphones the Spirit Torino Twin Pulse Isobaric Open Circumaural headphone and female vocal in the form of Judy Garland singing “Over The Rainbow”  (“Miss Show Business” – 24-bit/96kHz). Despite being a mono recording the performance was dynamic and emotional with phenomenal musicality and none of the tininess associated with older recordings.

Picking up my primary reference headphone the Dan Clark Audio ETHER C Flow 1.1 planar magnetic, I listened to several tracks before settling on “Make It With You” by Bread (“On The Waters” – 24-bit/192kHz). All I had to do to put myself into the studio was close my eyes. Again I experience a huge soundstage,  linear tonality, deep powerful bass, open and expansive strings, dynamic realistic vocals, and above all musicality.

Once again, ampsandsound have not disappointed. The ampsandsound Kenzie OG Rev 2 is everything one could want in a headphone amplifier; powerful, dynamic, musical with an incredibly low noise floor. The character of the amp, which is, in turn, the character of the 1626 tube in conjunction with the 5751 tube, is warm without being honeyed or boomy, neutral without being sterile, resolute without being bright, and revealing without being harsh. While it worked extremely well with everything I threw at it in terms of headphone and music, it is not as forgiving an amplifier as many tube amps, which is for the good for audiophiles wanting extreme accuracy but does mean that it needs to be coupled with high quality gear in terms of source and headphone.

As with the original Kenzie, the OG Rev 2 is for the audiophile who wants to wring the full potential out of their headphones and simply listen to the best-sounding music available. Listening to music on the Kenzie was so involving that it was difficult to concentrate on the job at hand and pick out the different characteristics of the sound, and even more difficult to stop and change headphones.