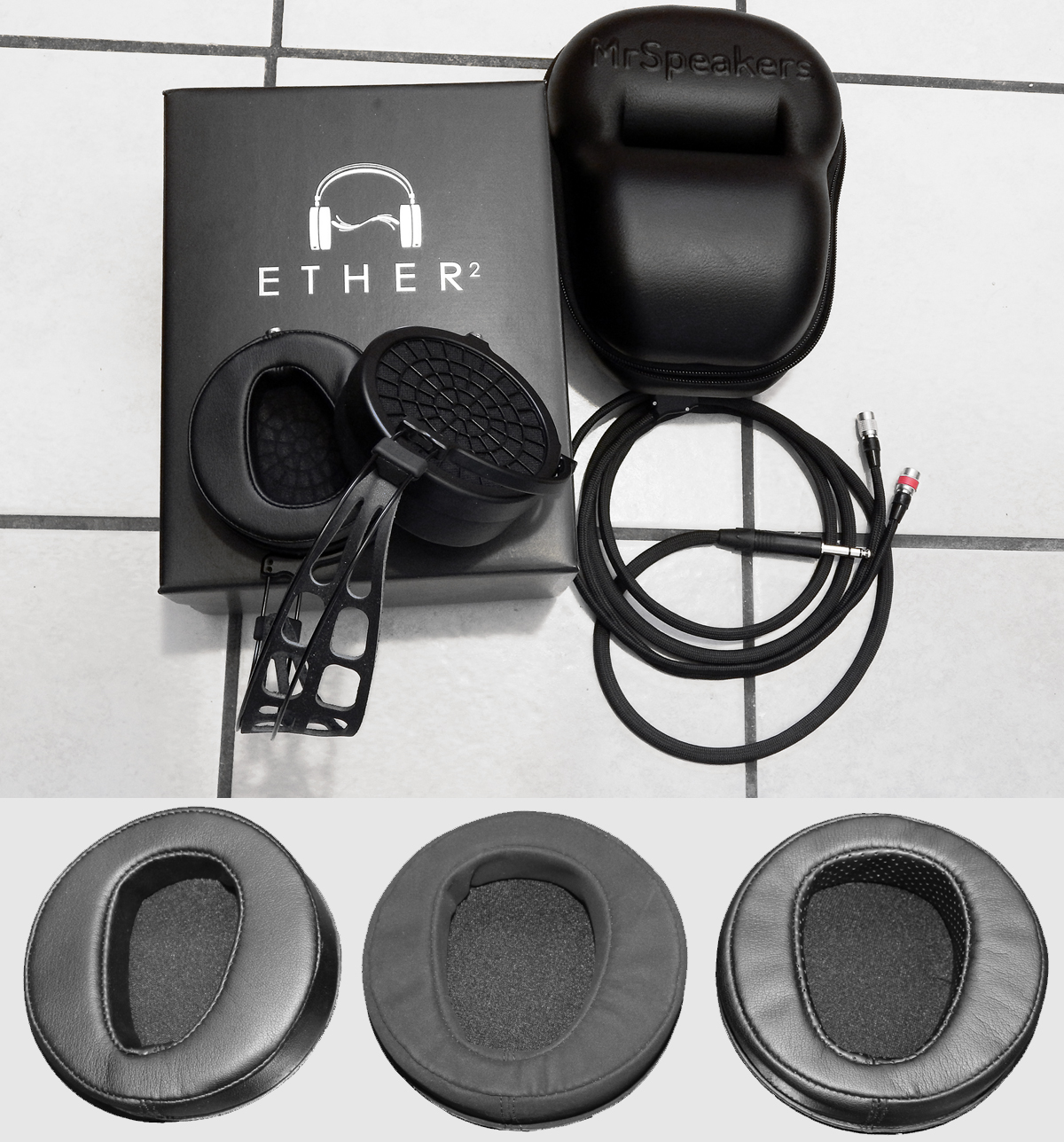 Regular readers will know that the Dan Clark Audio ETHER2 Planar Magnetic Headphones are my go-to reference open-backed headphone especially for judging resolution. Simply stated, they are the fastest non-electrostatic headphone I have heard with the added bonus of greater dynamic range and a more linear tonal balance than electrostatics, particularly on the bottom end. I won’t pretend that I have not been a fan of Dan Clark’s headphones from the beginning, well not the beginning beginning. I first met Dan Clark at AXPONA when I was working for a headphone amplifier manufacturer. My friend Bruce Ball brought a pair of MrSpeakers (the former name of Dan Clark Audio) Alpha Dogs to the booth for me to listen to. I was so impressed that I was prompted to go over and meet Dan at which point he handed me a different pair of headphones to listen to, saying that it was his first fully in-house built headphone including the drivers, the ETHER. I was completely blown away, it was the best sounding headphone I had ever heard, and subsequently, Dan blew me away repeatedly as he produced seven new models over a period of about 3 years, each a significant improvement over the last, culminating in the ETHER2 which I reviewed HERE, and as noted above has been my reference headphone ever since (Note: Dan has since released two new headphones under the Dan Clark Audio moniker; the AEON 2 open and AEON 2 closed which I have not had the opportunity to hear due to COVID-19).

In appearance the ETHER2 is striking and beautiful, screaming of the high quality design and construction applied to all Dan Clark Audio headphones. The earcups and pivots are all metal, with Dan Clark Audio’s signature Nitinol “Memory Metal” headband and a special lightened leather headstrap, plus a carbon fiber driver baffle, coming in at an extremely light 290 grams. For increased comfort, the ETHER2 employs an ergonomic synthetic protein earpad.

The real story is the motor, which was designed around their TrueFlow technology to realize major improvements in linearity, dynamics, and detail incorporating an ultra-light diaphragm.

And finally, to top things off, they include their silver-plated OFHC copper “VIVO” cable which while larger in diameter than their standard “DUMMER” cable is lighter and more flexible as well as less microphonic, and of course, the three Earpads.

As to packaging, the ETHER2 came in an attractive black box and included their familiar hardshell caring case.

As usual, I began by burning in the Dan Clark Audio ETHER2 Open Back Orthodynamic Headphones for several days using my iFi Pro iDSD in solid-state mode running Qobuz via the MUZO app. I then spent several hours in basic listening mode, performing some quick comparisons to my reference pair until I realized that the new pair were fitted with different Earpads and that I didn’t know if the difference in sound was accounted for by the pads, the updates to the newer headphone or the countless hours on the original pair. This led me to decide to judge each Earpad as a separate headphone on its own merits rather than try to A/B.

Since I was trying to find the individual characteristics of the three Earpads, I knew I would have to pick a selection of my best-known tracks and listen to them on all three so I started with Genesis’ “Can-utility And The Coastliners” from their album “Foxtrot” (DSD). My first impression was that the sound was slightly darker than I was used to, this made for a deeper, larger soundstage, it also made the harsher, brassier passages more musical without diminishing the intimate nature of the vocal. The bottom end was warm with fairly deep extension and excellent definition and impact.

Moving on to my 24-bit/96kHz vinyl rip of Robert Shaw and the Atlanta Symphony Orchestra’s performance of “The Firebird Suite” (“Stravinsky: The Firebird; Borodin: Music from Prince Igor”), I found all of that spine-tingling resolution without it throwing the vinyl noise and record pops in my face. The rumble of the opening cellos and brass was all there and the timbre of the instruments was spot on in a large expansive concert hall. Laser-sharp, the image placed each instrument solidly in a fixed space. The byplay of the oboe, English horn, flute, and violin drew you in sending chills through my chest.

Imagine sitting stage edge in a vast empty night club and you will get a sense of what I heard listening to Dusty Springfield backed by Herb Alpert and the Tijuana Brass for “The Look of Love” (“Casino Royale” – 24-bit/192kHz), the piano rich and full, the upright bass resonant, backed by delicate guitar, and gentle percussion. The sax and trumpet were smooth and musical with a baritone reediness to the sax.

Carefully peeling off the perforated pads (contrary to warnings on the packaging, if you are careful you don’t have to destroy the old pads to replace them, though the protective non-stick backing is another issue.) I put them aside and attached the non-perforated pads, which was pretty simple as the seam aligns with the connectors.

Returning to the “Foxtrot” track I was floored, in utter awe. There was all the dynamic, live performance fun that I was used to. In fact, despite the 1000 hour plus break in there was little difference between the new pair and my old reference pair. The tonal balance was neutral with a bit of warmth on the bottom end. The bass was more tuneful, with a little more weight, but without quite as much extension. Overall, everything had a bit more snap.

With “The Firebird Suite” the differences weren’t quite as stark, transporting you from say Disney Hall to the Hollywood Bowl. The crescendos are where they really departed, the non-perforated pads kicking in a dB of dynamics and sparkle.

The piano for “The Look of Love” was a bit more sprightly, and a touch of edge was added to Dusty’s voice as it reflected off the wall during the peaks of her performance, which translated to the horns during the coda.

The headbanger in me tells me that punk should be a tad painful and The Dickies delivered, while not as musical as with the perforated pad, the heart was delivered in full.

I’ll state upfront, the Suede Earpad has a silky suede texture and just feels better on your head. Now to the sound:

Queuing up “Can-utility And The Coastliners” I was prepared for the change but didn’t expect the results. The bass was similar to the non-perforated pads with perhaps a smidgeon extra weight, but overall a certain airiness was added, exhibiting added breath across the flute.

This held true for the “Firebird” also though it came at the cost of making the vinyl noise a little more prominent.

Dusty broadcast increased intimacy with a layer of musicality on top of that and maybe extra realism.

“Killer Klowns” was a modicum sweeter, teleporting you back into the studio and out of the club but still plenty dynamic and hard-hitting.

Well, this review and revisit of the Dan Clark Audio ETHER2 Open Back Planar Magnetic Headphone certainly did not dislodge it as one of my top five favorite headphones (three of which are Dan Clark designs), with its sensational resolution, large soundstage, realistic tonal balance, and fun presentation, it is a headphone that is hard to beat. And now with this new package, you don’t get one world-class reference headphone, but three with a profile to match pretty much any listener.

Personally, I enjoyed the Suede Pads the most, but would probably stick to the original non-perforated Ergonomic Synthetic Protein Earpads for product evaluation as they stand as the most revealing. The same goes for the Perforated Ergonomic Synthetic Protein Earpads, while definitely a much more forgiving headphone and a better choice for low-resolution recordings, forgiving is not what you are looking for in a reference headphone for test purposes. That said, I will have to give serious thought to ordering the Earpad set for personal use.

Once again, a definite three thumbs up and a whole hearted recommendation for the Dan Clark Audio ETHER2, probably the best value in a reference headphone out there.