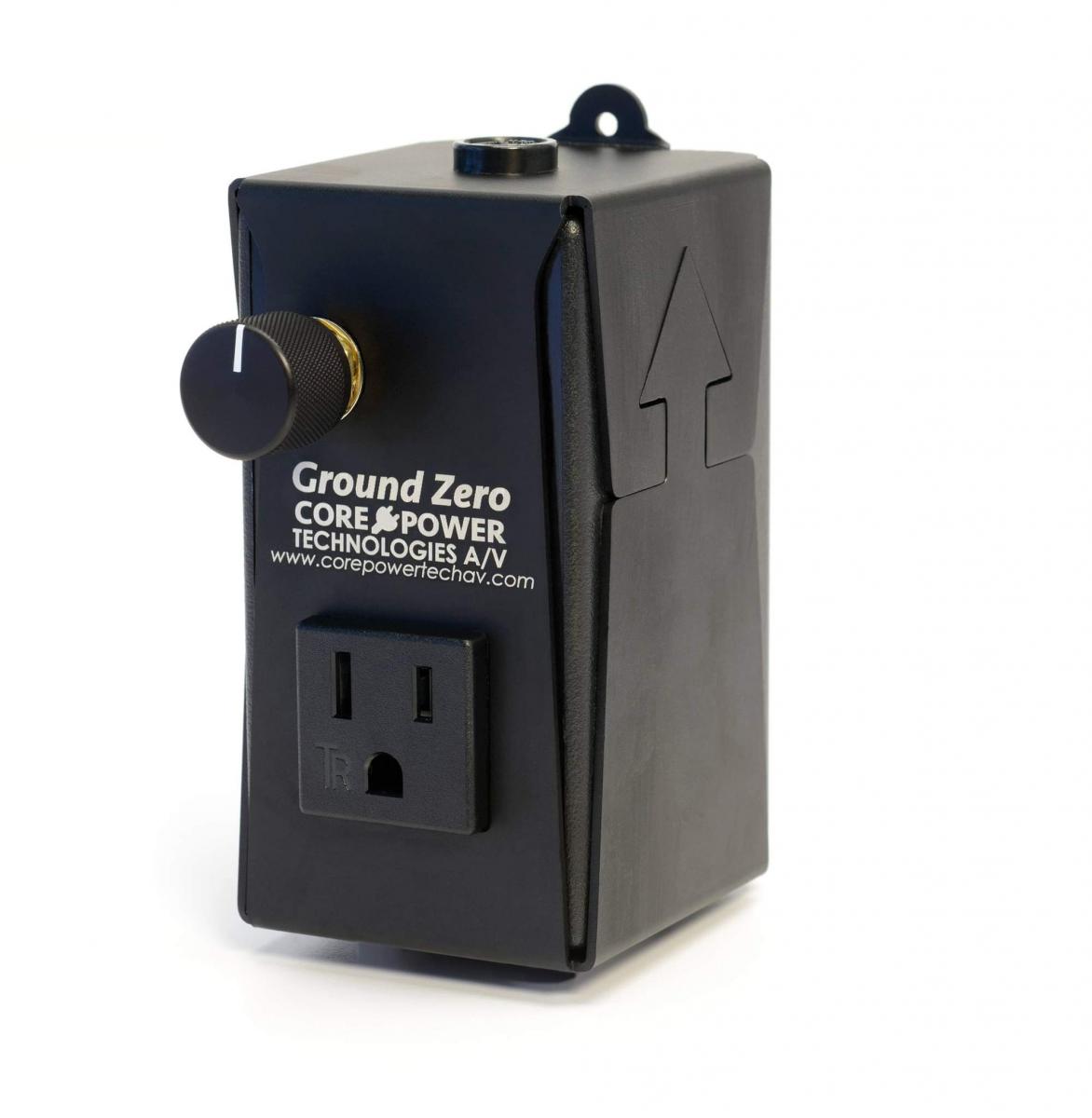 Probably the greatest source of unwanted noise in audio is unfiltered AC. Every motor, every fluorescent light, every microwave oven between you and the power station feeds back noise into your AC feed. Back in the day of CRT televisions, you could see this, and most of us have heard the noise caused by low voltage lighting. Unfortunately, for the Personal Audio enthusiast power conditioners are both bulky (often significantly larger than your desktop rig) and expensive. With the ever-growing popularity of single unit desktop DAC/Amps one is left with the question of what do I need a huge block with six to eight outlets when I only have one device to plug in? Well, now you have an answer to that question in the Core Power Ground Zero. About the size of a single gang outlet box, the Ground Zero is tiny with a single outlet for a single device and has a 600 Watt power handling capacity making it more than enough for any Personal Audio rig. And the cost at $399 (Introductory Sale at Underwood HiFi, MSRP is $599) is low enough to be justified in all but the most entry-level system (I’d be inclined to pair it with a Schiit Vali despite the fact that it costs more).

The little brother of the Core Power Technologies AV Deep=Core 1800, the Core Power Ground Zero is a 600 Watt single outlet power conditioner that not only filters out noise using the same DC scrubbing and RFI removal as their flagship Deep=Core but has a similar user-adjustable “Contour Control” that allows you to manually match the incoming AC to the needs of your audio component. It is a perfect match for single-source systems such as stereo receivers, music servers, and DAC/headphone amplifiers, as well as, mono-block and stereo amplifiers that are set up near the speakers rather than near the preamp and source components (it has been found that long interconnect runs are preferable to long speaker runs due to the high current demands of speakers).

The unit measures approximately 2 ¼” x 2 ½” x 4 ¼”, is all black, and is designed to plug directly into a wall socket, and includes a tab with a screw hole to secure it to the outlet plate. The Contour Control knob is above the outlet for easy access.

I should start this conversation by pointing out that I have rather unique power issues. First I live out in the desert in a fairly small community and secondly I run on Solar Power, so while I don’t have many of the interference issues of the big city, I also don’t have the robust power grid of the big city. So, rather than running low AC voltage (around 105 or lower), I run high voltage (around 120 plus), so much so that I run voltage regulators on all of my AV equipment. Then there is the phasing issue between the Solar Panels and the grid, this kept burning out my UPSs (Uninterrupted Power Supplies) to the point where I only run one on my computer now. The point is that not every environment is going to give the same results, some environments, and some amplifiers are going to see a major improvement while others will only have a minor effect. This was a problem I had back when I lived in Glendale and worked for Halcro. Glendale is a small wealthy LA adjacent community with its own power grid. People would send me gear complaining of power-related issues that I simply could not reproduce because my power grid was too good.

I began with the K5 Pro ESS running Qobuz on my FiiO M11 DAP via Coax S/PDIF and the FH9s as this constitutes the worst-case scenario, the first step being to listen without signal and adjust the Contour Control to best match the incoming AC to my system, and even in high gain the noise floor was incredibly low, in low gain, which is proper for an IEM, the FiiO was dead silent even with the volume turned to max. I selected Aoife O’Donovan’s “Age of Apathy” (24-bit/96kHz – Qobuz). “B61” offered deep rumbling bass, mellow rich piano, and dynamic vocals. The detail and resolution were much greater than a $150 DAC/Amp had any right to. The song “Phoenix” featured multiple acoustic guitars, electric guitar, congas, piano, bass guitar, and drums along with Aoife’s vocal, yet it was easy to pick out the individual instruments with extreme dynamic range and black space between notes from a budget DAC/Amp clearly not designed for IEMs as even on low gain I could not turn it much over ¼ volume and listen comfortably.

Switching to the ETHER2s for a more familiar sonic signature I cued up “At the Room 427” by the Koichi Matsukaze Trio (24-bit/44.1kHz – Qobuz). The spaces between the instruments during “Acoustic Chicken” were so black that it was hard to believe that it was recorded live before an audience, though during the bass solo you could hear the tape noise from the original recording. The sound was spectacular, definitely a recording that rates a revisit. The soundstage was in-studio which makes sense as the venue was a small classroom. Again the dynamic range was epic showing that the Ground Zero was providing plenty of clean current.

Moving up to the CMA400i, the baby Questyle doesn’t have the power supply of its bigger brethren. The CMA800 has 22 capacitors in it, obviously, at only two thirds the physical size, the CMA400i doesn’t have that kind of real estate, especially considering that it is a DAC/Amp as opposed to simply an amplifier, so it is a great candidate for the Core Power Ground Zero. Listening to Bach’s “Prelude and Fugue in C Major, BWV 846: Prelude (Transcription for Bass Viol by Lucile Boulanger)” as performed by Lucile Boulanger as part of her album “Bach & Abel: Solo” (24-bit/192kHz – Qobuz) reminded me of why I love this amplifier so much. Not only could you hear the reflections off the far walls of the large hall, you could hear her breaths as she played, which is something you usually don’t notice with a non-wind instrument.

Tubes are particularly sensitive to AC noise and RF interference. For this reason, like the FiiO, the iFi Pro iDSD uses an external power supply to separate the AC as far as possible from the tube and other RF sensitive components, albeit a much larger power supply, still nothing that can’t be assisted by another layer of filtering. We talk about noise floor and dynamic range, but dirty AC that enters the audio path via tubes, transistors, and DAC chips can also cause distortion that reduces the enjoyment of the musical experience often simply perceived as fatigue. “The Gods We Can Touch” by Aurora was clearly enhanced by the addition of the Ground Zero purifying the sound waves via cleaner power.

The event that really brought home how effective Core Power’s filtration can be came by accident. My LSA Warp One Stereo (Loudspeaker) Amplifier has a weird quirk that if you turn it on without a source connected it creates a loud hum, connecting the power to the Core Power Equi=Core 1000 reduced the hum by a factor of ten. While the Ground Zero doesn’t have the level of effect of the Equi=Core it still helped.

I’m a big believer in power conditioning, and the effects can be easily measured and easily perceived. Even a budget system can benefit from proper power conditioning, probably more so than more expensive gear, though expensive gear is not necessarily safe from noisy AC, especially in Personal Audio where the importance of power supply is often overlooked. The Core Power Ground Zero makes line conditioning affordable for budget HiFi and Personal Audio systems. I mean if you have a $5,000 plus system, by all means, go for the Equi=Power or Deep=Core they are well worth the investment, but if you have been avoiding line conditioners because of the cost, the Ground Zero is a great starting point and you will not regret making this step towards higher performance audio.

Contour Control, to match the AC power coming into the house to equipment power supplies.