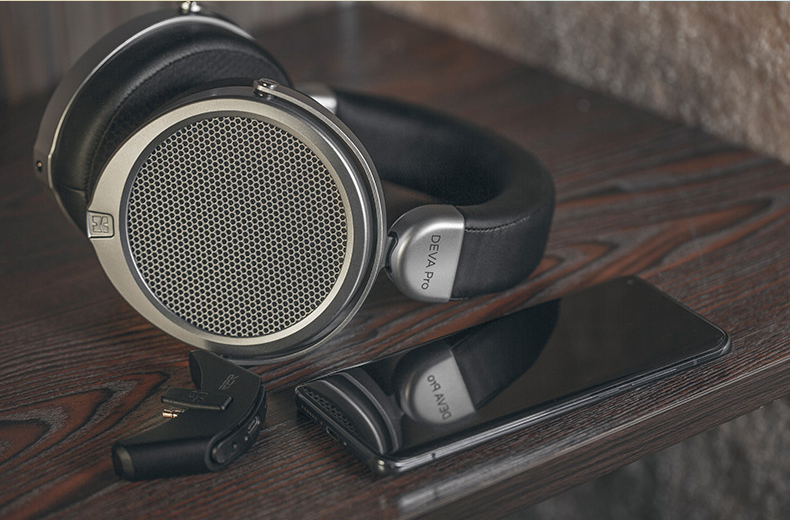 Though HiFiMan was the first (other than the one I was working for) Personal Audio company that I had contact with 10 years ago when I entered the Personal Audio community, and although the HiFiMan HE6se is one of my primary reference headphones, this is the first time that I have actually reviewed a HiFiMan headphone (I did review the Dana Cables Lazuli Reference Headphone Cable for the HiFiMan HE1000 and the Dekoni HiFiMan HE6se Elite Series Earpads which included a review of the HE6se). This is not due to any reluctance on my part, more due to the popularity of HiFiMan headphones among the editorial staff of Headphone.Guru meaning someone else usually gets them first. So when HiFiMan offered to send me the new HiFiMan DEVA Pro with the Bluemini R2R DAC, as you can imagine, I jumped at the chance. Not only is the DEVA Pro one of the most inexpensive high-end planar headphones, I believe the Bluemini R2R DAC is the world’s first R2R Bluetooth DAC.

Drawing on HiFiMan’s years of development and expertise into Planar Magnetic headphones and featuring advanced technologies developed in their world-famous reference-grade headphones, the HiFiMan DEVA Pro Headphone falls into the middle of their Premium line of headphones. In appearance, they are similar to the HiFiMan DEVA Headphone with some significant upgrades.

At its core, the heart of the DEVA Pro’s incredible sound quality is the use of HiFiMan’s exclusive Acoustically Invisible Stealth Magnet and their NEO “supernano” Diaphragm (NsD). HiFiMan has developed an advanced magnet design which is acoustically transparent, dramatically reducing wave diffraction turbulence as the sound waves pass through the magnet structure minimizing sonic distortion, while their NsD is 80% thinner than previous designs resulting in faster, more dynamic, and more detailed full-range sonics.

The most significant upgrade would be the HiFiMan Bluemini R2R DAC which features HiFiMan’s HIMALAYA R2R Architecture DAC chip which offers a higher dynamic range, lower Total Harmonic Distortion (THD), and significantly lower energy consumption than competing DAC chips. For those unfamiliar with the HiFiMan Bluemini and Bluemini R2R DAC, it is a small Bluetooth module that can be plugged directly into wired headphones making them essentially wireless. The Bluemini R2R DAC can also be connected directly to the source component via USB-C giving the DEVA Pro four different ways to connect (wired single-ended, wired balanced, Bluetooth, or USB).

The HiFiMan DEVA Pro Headphones & Bluemini R2R DAC came in a nice Glossy Black picture box with a satin lining separating the headphone and module from the protective foam. Also included were the 3.5mm TRS to Dual 3.5mm TRS cable, a USB-C cable, and the usual paperwork. After burning in the Bluemini R2R DAC and the DEVA Pros using my FiiO M11 DAP running Qobuz, I decided that since the DEVA Pro offered so many connection options I would start humble with my Moto G Power smartphone and work my way up.

Starting with the wired connection to my phone, I adjusted the DEVA Pro headband which snuggly encompasses your head giving a feel of security and excellent seal, launched Qobuz, and chose Cat Stevens’ “Harold and Maude (Original Motion Picture Soundtrack)” (16-bit/44.1kHz – Qobuz). While the volume was not particularly loud (I needed to max the volume on the phone) the presentation was warm and musical.

Switching to the Bluemini R2R DAC brought about an unbelievable improvement in sound quality. Along with the expected increase in useable volume, there was a marked increase in dynamic range, bottom end, and soundstage width and depth. The tonal balance was neutral with a hint of warmth. “Miles From Nowhere (Remastered 2020)” had Cat’s vocal up close and personal in a large hall with the listener completely immersed in the guitar, piano, and percussion giving the impression of multiple instruments. The bass was strong and well-defined.

Connecting the Bluemini R2R to the M11 gave a little finer volume control but as expected since both devices were running LDAC there was little change in the overall sound. Cueing up “Lucifer On The Sofa” by Spoon (24-bit/96kHz – Qobuz) I was treated to another thick and rich in-studio presentation with strong tight bass, impactful percussion, and fluid vocals. Going back to wired listening there was a clear difference in the DAC performance with a slight drop of resolution and dynamics.

The real test of HiFiMan’s HIMALAYA R2R DAC was to run the Bluemini R2R via USB to push the limits of its abilities without the limitations of LDAC so I connected the Bluemini R2R directly to my computer, launched Qobuz, and cued up “Nightscapes” by harpist Magdalena Hoffmann. The musicality was magnificent in a huge soundstage as if she were sitting beside me in a large open parlor.

To test sub-bass response and to see how the DEVA Pro scales up to a higher performance source, I booted up the Questyle CMA400i desktop DAC/Amplifier and put on my subsonic test track “Can-utility And The Coastliners” (Genesis – “Foxtrot” – DSD), and once again I was totally astounded by the musicality of the DEVA Pros. The tonality was very natural and balanced, with excellent dynamic range and deep powerful bass. For comparison sake, I returned to the Bluemini R2R (using the same track on the M11) which offered admirable performance, which while not as deep on the bottom end, had improved clarity over the Questyle.

For my next test, I borrowed the balanced cable from my HE6ses and plugged into the XLR output of the CMA400i, bringing up “Teen Town” by Weather Report from “Heavy Weather” (DSD) I was completely blown away, surely this was not the performance expected from a $330 headphone. Dynamic, resolute, tight, impactful, natural, and musical.

As a final test I moved up to my reference system a Manley Absolute Headphone Amplifier, with an Audio-gd R2R-1 DAC as source, using Cardas Iridium single-ended RCA interconnects, Cardas Iridium power cords connected to a Core Power Technologies AV Equi=Core 1000, and a Cardas Clear USB cable. Going back to Qobuz I selected Andris Nelsons and the Orchestre du Gewandhaus de Leipzig’s performance of “Tristan und Isolde, WWV 90 (Richard Wagner): Prelude To Act I & Mild und leise wie er  lächelt “Isoldes Liebestod”” (“Bruckner: Symphonies Nos. 1&5/Wagner:Tristan und Isolde: Prelude & Liebestod” – 24-bit/96kHz – Qobuz) and was simply charmed by the expansive soundstage and the rich resonant sound of the orchestra. The tympanis and celli were powerful and sonorous. The two words that best describe the DEVA Pro’s execution are musical and fun.

HiFiMan has a real accomplishment to be proud of in their HIMALAYA R2R Architecture DAC chip offering one of the most advanced and musical DAC chips out there breaking away from the Sigma/Delta crowd that make up its competition. The Bluemini R2R DAC has brought true audiophile sound quality to Bluetooth, making the most of what LDAC has to offer. On top of that, as a USB DAC the Bluemini R2R outperforms any chip-based DAC under $500, one could almost think of the DEVA Pro Headphones as being the free bonus to the Bluemini R2R rather than the other way around were the DEVA Pros not so spectacular in themselves. With or without the Bluemini R2R the DEVA Pro offers musicality, dynamics, solid bottom end, and a glorious soundstage not found in the under $500 headphone market. While not a replacement for my beloved HE6ses they are perfectly capable of delivering near reference-quality sound, that scales up beautifully to even the most high-brow of electronics while being forgiving enough to produce an enjoyable experience even from a phone (though experience says that in this case, Bluetooth is definitely better than wired).

I can honestly say that were I entering the Personal Audio market today as a first-time user without a cadre of reference-quality gear, the HiFiMan DEVA Pro with the Bluemini R2R would be my first choice, regardless of what style of music I was into at the time.