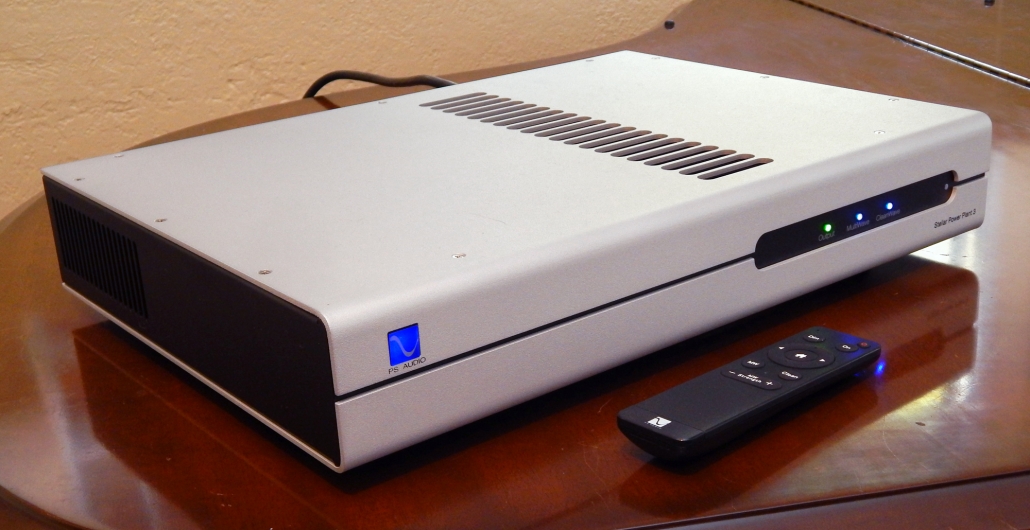 Why the PS Audio Stellar Power Plant 3, that is the question, and it is a very good one. Anyone who has to contend with the interference caused by an electric razor, blender, microwave or fluorescent lighting, not to mention watching the lights dim when a neighbor’s compressor kicks in, knows that it is a challenge to get pure clean and consistent electricity from the power grid, to your house, to your audio room, to your gear. I have known people to install gold plated breaker panels and run high-end power cables to their listening rooms in this pursuit.

Since the beginnings of high-end audio back in the nineteen fifties, the watchword for high performance and sound quality has been power supply. DIYers would spend hours building huge outboard power supplies, consisting of banks of oversized capacitors, often significantly larger than their actual amplifiers, for their hi-fi systems. Now PS Audio has brought this concept to the 21st century with the Stellar Power Plant 3.

Two key factors of sound reproduction are tied directly to power supply, noise floor, and dynamic range. Tonal balance is also affected by the purity of the AC signal. In this digital age, consistency of cycle interval can cause clock errors (funny note: in Europe, their clocks are losing time due to their integrated power grid, and the inability of some countries to maintain the cycle standard), which results in jitter. Also, line noise can obscure data signals resulting in forced error correction which means a loss of resolution.

A Line Conditioner is basically a surge protector (a device that monitors voltage looking for spikes and either dissipates them or shuts down entirely to protect the items running off of it) with a set of filters designed to limit noise and fluctuations in voltage. But, this is a very difficult goal to achieve with AC (Alternating Current), which as the name implies fluctuates continuously in an oscillating pattern.

A Power Regenerator first converts the voltage to DC (Direct Current) via a voltage regulator (ensuring a fixed voltage), then purifies that DC via a power supply, then reconverts the voltage back to AC via a clock controlled oscillator, then it is converted to the specific desired voltage via a step-up transformer, the result being a pure fresh power source devoid of any external noise.

The second is CleanWave, this sends a signal to demagnetize the transformers and cabling of connected devices reducing inductive capacitance and impedance, freeing up more power for use by those devices.

As a related feature the Stellar Power Plant 3 has a 50 times lower output impedance than typical AC sources again speeding up the transference of power.

And as a further added feature, the Stellar Power Plant 3 comes with a remote control to turn it on and off and activate the MultiWave and CleanWave functions.

Sleek is the word for the appearance of the Stellar Power Plant 3, it uses the same rolled aluminum casing as the other Stellar products. There three LEDs on the front panel; Output, MultiWave, and CleanWave. The PS Audio Logo is also a lighted power switch that allows you to place the unit into “idle” mode, the master power switch is on the back. Also on the back are 6 high-quality power receptacles, two of which are switchable between Regeneration and High Current Filtered Only, the HC/Regen switch, a circuit breaker reset, the fuse and the incoming power socket. The Stellar Power Plant 3 is equipped to accommodate audiophile power cables, but I used the basic cable for this review.

Set up is straight forward; the hardest part was deciding where to put it. Clearly designed to be stacked with the Stellar systems, though they say it must be on top for proper venting, proper power supply etiquette dictates that the Stellar Power Plant 3 be placed at least a couple feet away from the other components, I put it on the floor adjacent to my equipment stand.

After living with the Stellar Power Plant 3 for a couple of weeks, the real test will be pulling it out of my system, which I will save for my final test.

I began my listening tests with the Questyle Audio CMA400i as this has been my daily desktop for the last couple of weeks and the MrSpeakers ETHER2 Planar Magnetic Headphones for pretty much the same reason. The first thing you notice is the drop in noise floor, this not only makes for inky black spaces when the music has paused creating a much more realistic presentation allowing you to suspend disbelief and feel that the musicians are in the room with you, but opens a whole new world of micro-detail that was previously obscured by the previous noise floor. As you listen further, you start to hear the subtle increases in dynamic range that come from not only the lowered noise floor but the increased current storage in your power supply.

Pulling up Qobuz I selected “Who Killed Smiley Culture?” by Emily Capell. This piece is a single picked note acoustic guitar and vocal, with large spaces between notes. The abyssal silence lets you hear the reflections of the walls creating a greater sense of space. The quiet noises, like the buzz at the back of her throat, the squeak of her fingers on the strings, the click of the pick on the string and soundboard of the guitar all stand out in bas-relief. The sound is intimate and alive with a huge soundstage.

Bringing up a 24/192 kHz recording of Heart’s “Dog & Butterfly” (“Dog & Butterfly”), again the sound was intimate and personal as if they were performing just for you in your room. Small details previously unnoticed are unveiled like the slight burr of the Rhodes piano in the background, just loud enough to create an atmosphere against the louder instruments in the foreground. The vocals clearly become two individual voices rather than simply a harmonic whole. Not only is everything more dynamic in a larger space, everything is tighter, more robust building a tapestry of individual instruments, making it sound like a band, not just a recording of combined sounds.

Switching to my reference rig consisting of the Questyle Audio CAS192D Current Mode DAC and two CMA800R Current Mode Amplifiers bridged into full mono balanced output and the MrSpeakers ETHER C Flow 1.1 closed backed planar magnetic headphones I was completely shocked at the silence. It is important to note that the gain on this system is about 10 times that of the 400i, sending close to a watt to each channel. On top of that, between the three components, there are a whopping 66 high-end power supply filter caps, meaning the on-board power supplies were already about as filtered as you can get.

Choosing Eiji Oue conducting the Minnesota Orchestra’s version of “The Firebird Suite” (Stravinsky) due to its being a DSD track and therefore quieter and more dynamic and resolute, the black noise floor was replaced by the baseline hall air and noise of the recording. For the first time, I did not lament having to return the “Gold Stack” which with its ceramic circuit boards was significantly quieter than my system. The palpable reality of the presentation was jaw-dropping, the hall was noticeably larger, the instruments pushed that much closer to their natural native real-world dynamic range, reinforcing the illusion that you were in the actual hall with the musicians. You can hear the musicians shift position as prelude to the first crescendo, and the impact was intense. The detail of all the intertwined instruments was clearly defined with air and space around each player. What was previously perceived as percussion was, in reality, the impact of the bows on the strings of the basses and cellos.

Then came the dreaded experience of removing the Stellar Power Plant 3 from the system. Immediately the baseline noise level was noticeably higher (IE: I could actually hear the gain noise with no signal at the volume I was previously listening). Some of this noise was caused by the DAC in idle as when DSD switched in it dropped perceptibly, and it remained below the baseline noise of the recording, but a little bit of life was sucked out of the presentation. Some of the suspension of disbelief was lost. I know over time this system will return once again to the enjoyability it had before demoing the Stellar Power Plant 3, but for now, it has lost the magic that made it my reference system.

Going into this review, I knew the effect that line conditioners and power regenerators can have, but knowing and experiencing are two completely different things. Truth be told, I generally avoid line conditioners because they can limit the amount of current available to the amplifier, but not so with the PS Audio Stellar Power Plant 3, with the power regeneration and MultiWave functions the power availability increases as long as your devices fall within the 300 Watt limitation (which should cover almost any personal audio application), if not, PS Audio does make larger units for more demanding systems, and for loudspeaker configurations.

The sonic benefits to the Stellar Power Plant 3 are clear and palpable. Lowered noise floor and increased dynamic range, which in turn gives you enhanced detail, more air and a larger soundstage, and often can improve your tonal balance by increasing the linear bandwidth of your system (not applicable to the systems used in this review as they employ Current Mode amplifiers which have extreme linear bandwidths inherently, but might be noticeable with many solid-state amplifiers, especially those that are chip-based rather than discrete).

If you love your current system, but would like to move up to the next level, before you scrap your amplifier or even your DAC, I suggest giving the PS Audio Stellar Power Plant 3 a try, but I do warn you, that you will not want to go back once you do. Heartily recommended.