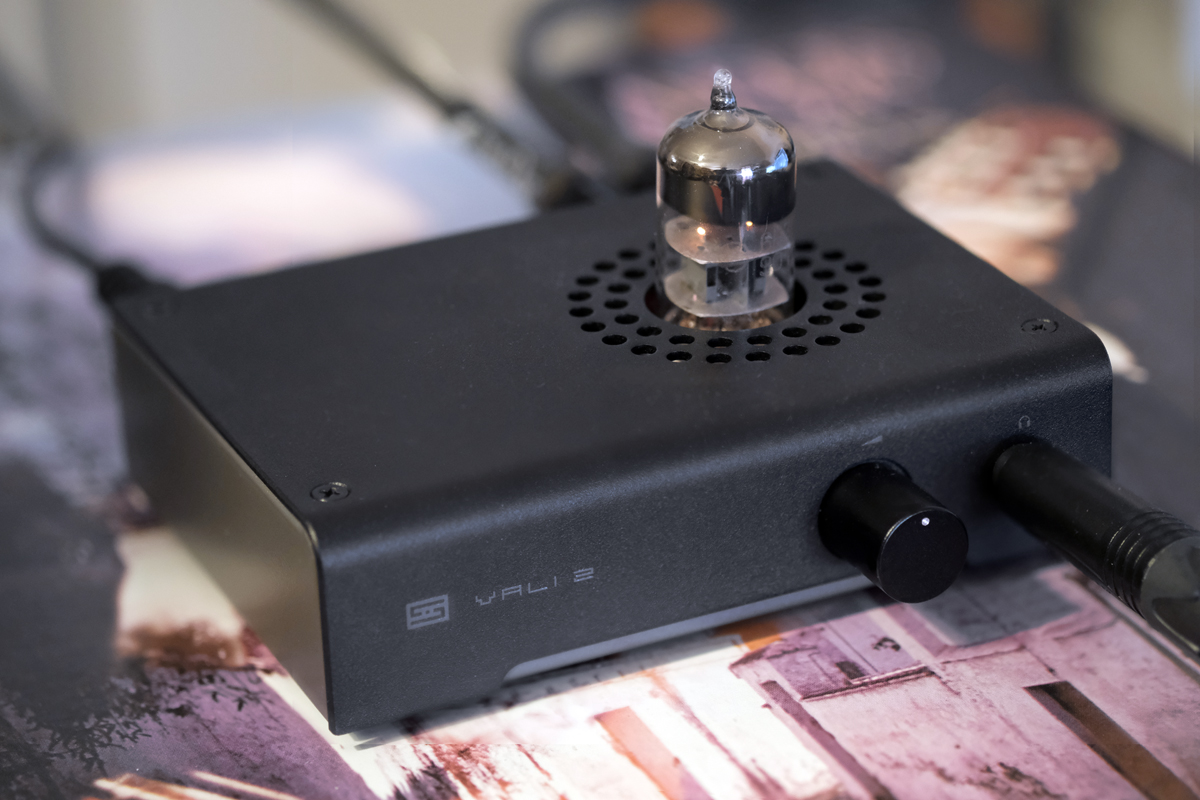 I’ve made little secret of the fact that the Schiit Audio VALI 2 Tube Hybrid Headphone Amplifier that I reviewed four years ago is my favorite amplifier. Not because it is the very best sounding amplifier, the Schiit Audio Lyr 3 for one is a significantly better sounding amplifier, but because it is a great sounding tube amp for a price that leaves no one an excuse for not owning a tube amp, even if you prefer the hard brittle sound of solid-state. Also, its single-tube design makes tube rolling incredibly easy and inexpensive for those who like to tweak their system. Now Schiit Audio has introduced the VALI 2++ (a name, like many of Schiit Audio’s names, sounds like it has a story behind it), and I was lucky enough at CanJam SoCal 2023 to have Denise offer to let me take the show sample home to give it a try.

As one would expect, the Schiit Audio VALI 2++ looks pretty much the same as the Schiit Audio VALI 2 I reviewed last time except that this one is in Black. For those that haven’t seen its predecessor, it’s tiny, basically the size of a deck of playing cards or a DAP with its single tube sticking out the top, which is unusual for a desktop unit, but since it uses an external power supply, there really is no reason for it to be larger, and smaller means shorter signal paths and less opportunity for signal degradation. And, it is cute, and of course, you can pair it with the Schiit Modi DAC and/or the Schiit Loki Mini equalizer which use similar chassis, though it would have to go on top because of the tube.

So I can see some of you scratching your head and thinking, “A single tube, how does that work, don’t you need two for stereo?” The answer is fairly simple, the tubes in question are dual triode tubes, meaning they have two triode amplifiers in them which were used in push/pull (balanced/bridged) amplifiers or class B amplifiers (which also require two amplifier stages), which by default require them to be extremely closely matched to perform their function, Schiit simply separates them out to operate as two separate single-ended triode amplifiers eliminating the need for expensive tube matching. Officially Schiit identifies the amplifier topology as Coherence™: tube voltage gain with convolved bipolar current mode inverter and discrete bipolar class A driver and Class AB output stage.

Vali 2++ delivers plenty of power for hard-to-drive headphones (a whopping 1.5 Watts @ 32Ω)—and also provides the low noise you need for sensitive cans. Plus, it covers all your needs with preamp outputs for your powered monitors or speaker power amp…and it stacks perfectly with our Modi DACs or Loki Mini equalizer to create a complete desktop system.

Vali 2++ uses a unique, class-leading power supply that gives us 60V on the plate. Combined with our unique Coherence™ topology—the only fully discrete, current-mode noninverting hybrid topology in any amp near this price—Vali 2++ redefines what you can expect from an affordable tube amp.

Roll Your Own Sound

Vali 2++ was designed with a single tube, so you can easily swap out the supplied 6N3P tube for a wide variety of interesting options, including 5670, 2C51, 6ECC42 and even WE396A! Stick to the great stock sound, or find the perfect tube for you!

If you want measurements, we got measurements—Magni Heresy, Magnius, Modi, and Modius got you covered. But if you’re ready to have some fun with something completely different, Vali 2++ is for you. Enjoy tube sound without tons of noise, play with different tubes without having to get a second mortgage for a matched quad, and see what this whole tube thing is all about!

Designed and Built in California

By “designed and built in Texas” this is what we mean: the vast majority of the total production cost of Vali 2++—chassis, boards, transformers, assembly, etc—goes to US companies manufacturing in the US. Our chassis are made minutes from our facility. Our PCBs are done in Nevada, Utah, or California. Yes, the wall-warts are made in China, but there’s some give and take at this price point. (I believe the “Designed and Built in California” is a holdover from before the move to the new facility in Texas, though as I understand it some items are still done in California.)

Vali 2++ is covered by a limited warranty that covers parts and labor for 2 years, and 90 days on the tubes. That’s 2x the coverage of most amps in this price range. And, if you don’t like your Vali 2++, you can still send it back for a refund, minus 15% restocking fee, within 15 days of receiving your amp.

I began my listening tests of the Schiit Audio VALI 2++ with my reference system as source; Audio-gd R2R-1 DAC, Black Dragon Cables, Core Power Technologies A/V Equi=Core 1000, so as to have a level playing field for initial testing. Given the significant power increase over the original VALI 2, noise floor was my biggest concern so I started out with the Grado GS3000X Headphone which have IEM levels of efficiency. Even in High-Gain the VALI 2++ was dead silent until over 50% volume which was a good quarter turn higher than I could listen with music playing, I would guess well in excess of the advertised 114dB which puts most solid-state amps to shame. In Low-Gain I could hear a slight hiss at full volume, but again, well beyond most people’s ability to stand.

For my first track, I selected the Red Hot Chili Peppers’ “Return of the Dream Canteen”. The opening track “Tippa My Tongue” is a spectacular mix of funk and psychedelic with a hint of house. The bass was lightning fast and tight with both thump and impact. The soundstage was ethereal and three-dimensional. The presentation was both live sounding and musical.

I was impressed enough that I switched to my Noble Katanas which are the most efficient headphone or IEM I have ever tested. Putting on Peter Gabriel’s cover of “Here It Is” from “Here It Is: A Tribute to Leonard Cohen” (24-bit/96kHz – Qobuz) I found the volume control subtle enough to find the right listening level, given that max comfortable volume occurred at about quarter turn, that was impressive in itself. Again the bass was strong and tight. The saxophone was mellow and musical, the piano full and rich. Peter’s vocal was intimate in a large hall.

It was time to move into the realm of believable, so I connected my $199 HIFIMAN DEVA Pro headphones and switched to the $139 Questyle M12 inline DAC as source, and queued up “Time Of The Season” by The Zombies (DSD). The sound was sublime, especially given the whole system cost less than $500, tight strong bass, large soundstage, neutral timbre, and most of all musicality.

For my final test, I went back to the R2R-1 because I was having problems with my 3.5mm TRS to R/L RCA cable, and I chose my Dan Clark Audio EXPANSE headphones, which are one of my hardest to drive headphones but are also my most resolute headphone. Choosing my detail and sub-bass test track “Can-utility And The Coastliners” from Genesis’ “Foxtrot” the dynamics and bass control, with deep resonance and power.

I admit I went into this review expecting something great and was not disappointed, in fact, the Schiit Audio VALI 2++ Tube Hybrid Headphone Amp/Preamp more than exceeded my expectations. With a noise floor dark enough to run IEMs and power enough to run almost any headphone the VALI 2++ is truly a one size fits all proposition, even if that size is physically small enough to disappear on your desktop. The tonal balance is neutral with a solid deep tight bottom end and an incredibly musical midrange that is forgiving enough for cheap headphones, yet resolute enough for your reference cans.

For first-time buyers, if you match it up with the Schiit Audio Modi DAC and say the HIFIMAN DEVA Pro Headphones you would have an audiophile quality system for less than $500. And for die-hard solid-state buffs, you can see what all the fuss is about and experience a whole new world of musicality for the cost of one less Starbucks a day for two weeks. If you like to tinker, and many of us started in this hobby for that very reason, the VALI 2++ is a great way to explore the world of tube rolling, something I really looked forward to, but as it turned out, none of my 50-year-old tubes fit the pinout of the 6N3P but as you can see by the list above, there are plenty that do (many for as low as $19).

So a big double thumbs up to Jason at Schiit Audio for making my favorite amplifier even better.

Note: Maximum power rated at less than 10% THD for tube and tube hybrid amps, as compared to less than 1% for solid state.