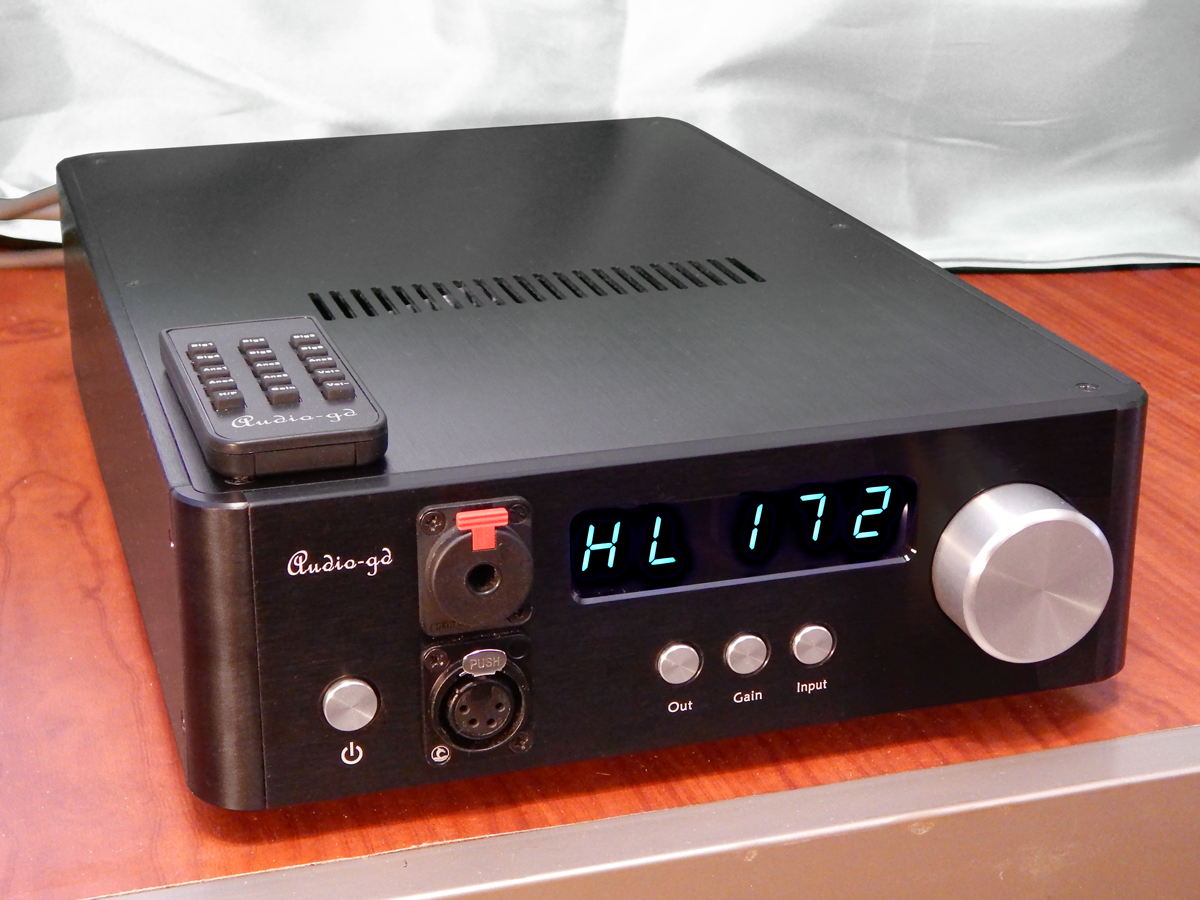 Thanks to our friends at Underwood HiFi something very exciting has come to America; the Audio-gd NFB-1 AMP Headphone Amplifier/Preamp. You can be forgiven for reading that as Audio-god (or gold) because the NFB-1 AMP certainly fits the bill. The NFB-1 AMP is the newest entry into the growing lexicon of Current Mode amplifiers and Audio-gd has pulled no punches in their zeal to produce what is not only an amazing deal at $799 US but one of the best solid-state amplifiers I have heard.

My tenure with Translinear Amplification (Current Mode) dates back about thirteen years to my time with Halcro. The DM series of megabuck amplifiers ($20,000-$40,000) were equipped with Current (Mode) Audio Signal Transmission (CAST) inputs and outputs (on the preamp) which offered significant benefits over either standard single-ended or balanced connections. I don’t know if the amplifier itself was Current Mode, it was never mentioned (Bruce Candy was long gone by that time so I don’t know if anybody actually knew, I certainly didn’t know to ask) but it would account for the amplifier’s amazing sound quality (Bruce Candy measured his distortion in parts per billion). The reason I bring it up is that besides being a Current Mode design, the NFB-1 AMP also offers CAST connections (slightly upgraded over Halcro, whereas Halcro used single-ended connections for its CAST, Audio-gd uses balanced connections via mini XLR).

Elegant and attractive the chassis of the NFB-1 AMP is milled aluminum (black) with rolled corners, long rather than wide (W 240mm X L360mm X H80mm) presumably to accommodate the two separate internal shielded chambers (one for the Class A power supply and control board and one for the two amplifiers). The front panel sports a good-sized florescent display bounded by a volume knob (aluminum) on the right, three pushbuttons (aluminum) underneath (Out[put], Gain, Input), a locking ¼” TRS single-ended output above a four-pin XLR balanced output to the left with the power button to the left of that. The rear panel is a little more complicated as it is mirror-imaged for the two amplifiers: So on the top row you have (from the outside in): IN1 (XLR balanced), IN5 (XLR balanced), OUT (XLR balanced), OUT (mini-XLR ACSS), and on the bottom row (again from the outside in): IN2 (RCA single-ended), IN3 (mini-XLR ACSS), IN3 (RCA single-ended), OUT (RCA single-ended), and the power receptacle at center.

Output is switchable between H (headphone) and P (preamp), Gain is switchable H (high) and L (low), and the Input toggles through the five inputs. There is a remote included though it does appear to be a standard remote for the complete line as it offers functions not available on this model, to wit Dig1 through 6 (presumably digital inputs for the R28 DAC/ Headphone Amplifier/Preamp). The NFB-1 AMP does appear to remember the volume settings for each input separately.

I burned in the Audio-gd NFB-1 AMP in using my FiiO M11 running Qobuz and my latest break in playlist (made up of jazz and blues artists from the 2021 Grammys) as source via the single-ended RCA inputs (IN2) driving my Campfire Audio Cascade headphones. After burn-in, since I don’t have the matching Audio-gd R2R-1 FPGA PCM/DSD DAC (meaning I wasn’t able to test the ACSS connection), I switched to my reference DAC the iFi Pro iDSD connected via balanced input (IN1) using Cardas Iridium XLR cables, Iridium Power Cords and a Cardas Clear USB Cable.

I’ll start by pointing out that despite its Class A architecture and running continuously for over two weeks, the NFB-1 AMP is only slightly warm to the touch. My initial listening began with the Dan Clark Audio ETHER2 Orthodynamic headphones using the Dan Clark Audio Suede earpads and the single-ended Dan Clark Audio Dummer Cable listening to Frank Zappa’s “Halloween 81 (Live At The Palladium, New York City 1981)” (24-bit/96kHz) on Qobuz while writing my monthly music review for our sister publication HiFiAudio.Guru. My first impression was warm and musical a feeling that did not diminish over subsequent listening.

The first track I chose my serious listening was “Dear Diary” (DSD) from the Moody Blues album “On the Threshold of a Dream” which features acoustic bass guitar on the left and acoustic guitar on the right along with grand piano, muted percussion and gong in the center and three flute tracks distributed across the sound field, with multiple vocal tracts employing various effects, and keyboard-based orchestra in the background. That all of these layers of sound can easily be distinguished speaks volumes for the resolution of this amplifier. The tonal balance and three-dimensionality of the soundstage were very natural and realistic with a great feeling of depth and width giving a true in-studio experience. But first and foremost was the musicality completely devoid of any harshness or coloration.

Switching to my most demanding headphones the famous HiFiMan HE6se Planar Magnetic headphones (connected via four Pin XLR) and choosing my most demanding musical track Eiji Oue and the Minnesota Orchestra’s performance of “The Firebird Suite” (“Stravinsky” – DSD) I was treated to the most lifelike performance I can recall hearing from a solid-state amplifier. The soundstage was epic with massive air around the instruments, each solidly stationary, a true collection of individual instruments rather than a field of orchestral sound. The blare of the horns during the crescendos, the clamorous reflections of the full orchestra off the walls of the Hall all performed with a musicality and clarity that not only made what would normally be the most abrasive passages pleasant, but brought out details of the trilling woodwinds that were previously unnoticed in a track that I have listened to literally hundreds of times. So lost in the music was I, that I needed to listen to it twice just to remember to look for the normal issues like timbre and tonality that I use this track for. Though I did need to switch to high gain (I was previously listening in low gain) the dynamic range was incredible, the kettle drums offering real impact and texture. The timbre and tonality of the various woodwinds, horns, and strings were so distinct in sound and placement that it felt remarkable that I had ever noted the similarity of their sounds. This was clearly my best experience with the HE6se spectacularly emphasizing the reasons for their popularity among true audiophiles.

Moving to another hard to drive headphone (for completely different reasons) the Spirit Torino Twin Pulse Isobaric Open Circumaural headphone and another equally hard to drive track, Mahavishnu Orchestra’s “Birds Of Fire” (“Birds Of Fire” – DSD). The speed and dynamic range required to reproduce the cacophony of competing instruments, especially with a dynamic headphone, was more than met by the NFB-1 AMP. Again details I had not perceived before were brought out like the fact that the violin lead was in fact two violins playing in sync, rather than one passed through a delay (I could actually hear the subtle differences in the performances). Each pass I was able to pick out new nuances, such as it also became clear that there were two drummers working in parallel.

To test the bottom end, I broke out my Dan Clark Audio (MrSpeakers) ETHER C Flows (connected via the balanced output) and cued up my subsonic test track “Can-utility And The Coastliners” from Genesis’ “Foxtrot” (DSD). The Audio-gd easily provided the copious levels of current and damping necessary to convey the subtle bends in the subsonic bass pedal notes as well as delineate between the bass pedal and bass guitar playing in unison.

To start with the Audio-gd NFB-1 AMP Headphone Amplifier/Preamp is one of the best sounding solid-state headphone amps I have heard, which is quite the accomplishment at such a low price. For raw power and damping, as well as tonal balance and clarity I would happily put it up against amplifiers costing two to three times as much. For musicality and resolution, it can stand toe to toe with most tube amps. I won’t say it sounds like a tube amp, because that is a prejudice that comes with a lot of undeserved baggage (what most people think of when they say a solid-state amp sounds tuby is rolled off highs and anemic bottom end, with high levels of THD added in to boot), what the NFB-1 AMP does sound like is what an amplifier should sound like, which is nothing, no coloration, or more to the point, like music, completely transparent.

For anyone looking for a top-notch headphone amplifier that works well with all types of headphone and music or an inexpensive preamp with a built-in headphone amp, then Audio-gd has your ticket and it is called the NFB-1 AMP.