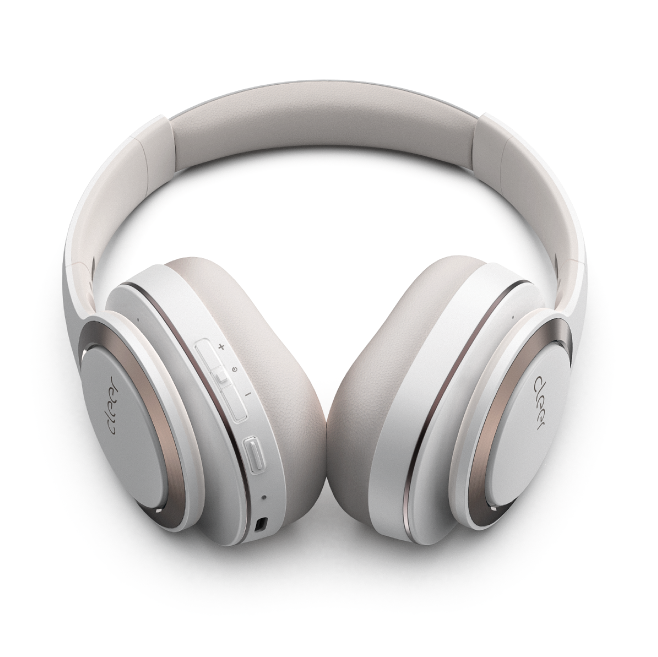 As mentioned in my Cleer ALLY PLUS II Noise Canceling True Wireless Earbuds review the Cleer FLOW was the first truly great Noise Canceling headphone I had ever heard not to mention Bluetooth as well, and as promised in that review this is the follow-up review of the new Cleer Enduro ANC Wireless Bluetooth Active Noise Canceling Headphone, not a replacement of the Cleer FLOW, but an additional offering to fill out the line falling between the FLOW and the FLOW II in price, which has benefited from all the research and development that went into the Cleer FLOW not to mention several years of technological advancement.

The Cleer Enduro ANC Wireless Bluetooth Active Noise Canceling Headphone is very similar in appearance to the FLOW (and FLOW II) with slightly different molding to the headband and pad with the spring steel exposed on top and smooth rather than textured trim rings which are not removable. They come in two colors; Navy (which appears to have bronze-colored trim rings) and Warm Grey with copper-colored trim rings (which is the version I received). Like the FLOW the Enduro ANC folds up neatly for travel. The controls (volume +, power/multifunction, volume -, ANC) which have tactile indicators for ease of use, indicator light, and USB-C port are on the left earcup (which is labeled on the inside of the headband).

First among The Enduro ANC’s features is its 60-hour battery life, making it the first ANC headphone to achieve this. Along with 25dB of Active Noise Canceling the Enduro ANC also features Cleer’s Ambient Awareness which allows the user to hear outside sounds without removing the headphones enhancing the user experience when used as Bluetooth headset for phone calls, via Bluetooth 5.0 with the aptX Adaptive codec, employing dual microphones with Qualcomm’s cVc 8th generation noise suppression. And, of course, the Enduro ANC employs Cleer’s 40mm Ironless Driver for clear distortion-free sound. Plus, like the ALLY PLUS II, the Enduro ANC is configured to work with the Cleer+ App permitting the user to adjust the amount of Ambient Noise Control as well as change the equalization and check on battery life. On top of that, Cleer provides a 3.5mm TRS stereo to USB-C cable to permit the Enduro ANC to be used as a wired headphone.

I was easily able to verify the Enduro’s 60-hour battery life while performing my usual burn-in cycle using Qobuz on my FiiO M11 Plus LTD DAP as source via Bluetooth. I used my Motorola Moto G Power smartphone for Bluetooth listening tests and the M11 Plus LTD, as well as my iFi Pro iDSD, Audio-gd R2R-1, and MANLEY Absolute Headphone Amplifier for the wired tests.

I began my listening tests with the post-punk early Seattle grunge band Mudhoney and their 1991 release “Every Good Boy Deserves Fudge” (24-bit/96kHz on Qobuz). Cycling through the ANC settings other than a few seconds during the voice status updates, there was no apparent change in sonic characteristics. The EQ in the Cleer+ App offered eight presets (Rock, Pop, Hip Hop, Dance, Jazz, Classical, Acoustic, and Flat) plus two custom settings. In “Flat” the drums had a bit of depth, whereas the guitars were immediate and bass a little on the heavy side. Playing with the EQ settings I found the Rock mode created a live club atmosphere, which seemed appropriate to the music. Whereas the Jazz and Acoustic settings created a more pleasant flatter opener sounding presentation, with Jazz being a little darker than Acoustic.

To get a better picture of the tonal balance I selected “A Winter Romance” (24-bit/96kHz on Qobuz) as performed by Dean Martin. The timbre was on the warm side with a slight bump in the low bass, not unusual for a headphone in this price range and much more musical than most. Dean’s baritone was magical while the background choral was full. The strings and woodwinds were rich and pleasant especially the solo instruments, and the piano and vibes were clear and crisp yet gentle, only the cello seemed a bit over-pronounced.

Those who know me, know that I don’t have a favorite band, not being able to choose between different genres much less the myriad of brilliant artists that represent each. But that hasn’t always been true, in the mid-’70s my favorite band was Uriah Heep, and my favorite album was “Demons and Wizards” and my favorite track was “The Wizard” so I decided to give that a listen (16-bit/44.1kHz on Qobuz). This confirmed my first impression that the bottom end was a little heavy, so I once again went into the EQ and dropped 250Hz about 5dB and raised 64Hz and all was right with the world. That being said, the acoustic guitar was clear and rich, and the vocal was musical.

Sensing that it was time to test the wired performance I booted up the FiiO M11 Plus LTD and cued up “Can-utility And The Coastliners” (DSD) by Genesis from their album “Foxtrot”. First listening in Bluetooth, I confirmed what I suspected that the sub-bass was excellent with deep extension though a bit emphasized. Switching to the wired configuration while the overall tonal balance remained the same the tightness and control of the bottom end improved remarkably and the resolution increased dramatically, which means that the Enduro ANC is able to scale up to higher resolution sources admirably.

To further test this I switched to the iFi Pro iDSD and cued up “The Firebird Suite” as performed by Eiji Oue and the Minnesota Orchestra (“Stravinsky” – DSD). The soundstage portrayed a real sense of space and the image was solid with each instrument firmly established in its own space. The tonal balance was excellent with the hump in the bottom end just adding weight, impact, and resonance. The dynamic range was very good. I once again cycled through the ANC settings and was pleased to hear almost no change in sound.

To see how far this could go I fired up the Audio-gd R2R-1 and my MANLEY Absolute Headphone Amplifier to listen to Louis Armstrong sing “What a Wonderful World” (“What a Wonderful World” – 24-bit/192kHz) and was treated to magic. Though the bass was a little too pronounced for an acoustical instrument, the guitar was rich and warm and the strings, horns, and woodwinds were incredibly musical. And the vibes, like crystal. All set in a large theater or nightclub.

The noise-canceling is excellent, able to block out all the sounds in my environment, but unlike the ALLY PLUS II, it doesn’t appear to be active in Ambient mode.

Of course, this review wouldn’t be complete without a phone call, so I reconnected to the phone and called some friends to test the performance. I found the optimum Ambient setting for phone calls was about halfway, and according to those at the other end, my voice was clear and understandable with no background noise.

We have to remember here that the Cleer Enduro ANC Wireless Bluetooth Active Noise Canceling Headphone is a hundred and fifty dollar headphone, with its own internal amplifier and ANC and Bluetooth to boot. It easily performs as well sonically as any sub-two hundred dollar wired headphone that has crossed my desk and better than most, especially on the bottom end. If you are into dance or club music this is the headphone for you, if not the EQ can fix that.

As noted above, the ANC is excellent, and these are the perfect headphone for on the go. The build quality is exemplary and the spring steel headband is a welcome addition in a light travel headphone (I have a goddaughter who is constantly breaking headbands that I then have to re-engineer). The comfort is also excellent and as they are a headphone designed for hours of listening while on airplanes and such, this is a good thing. The cups are small and fit close to the ear which is a necessary thing for a proper seal to close out unwanted noise and enhance the noise-canceling properties of the headphone. All in all, they are a great value and a wonderful choice especially for younger people who spend a good deal of time traveling and are demanding of their audio sources. A definite thumbs up and full recommendation.

Connections: USB-C to 3.5mm for audio, USB-C to USB-A for charging

Charging: A 10-minute charge will give 2 hours of playtime. ENDURO ANC can be fully charged in 3 hours