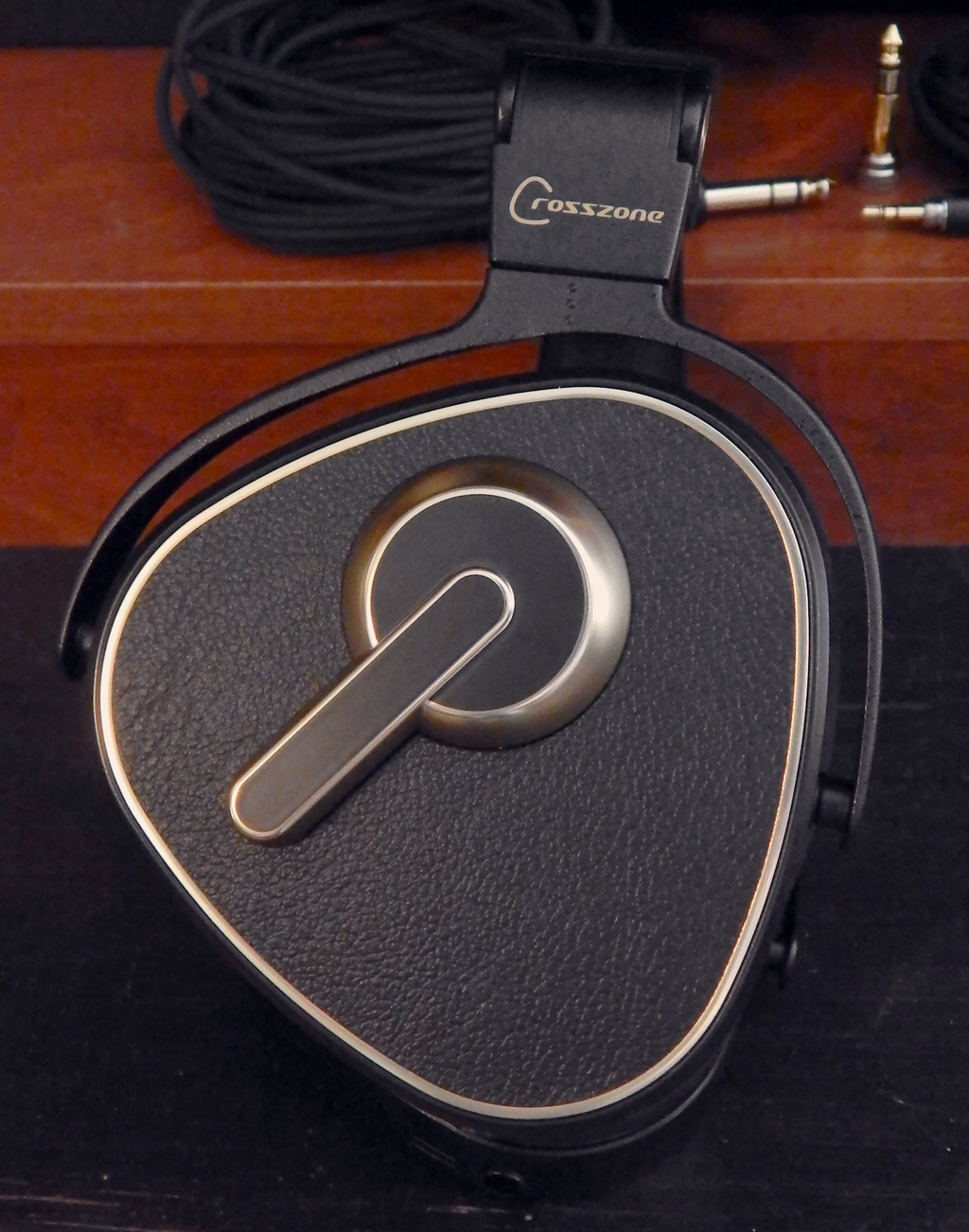 It was about a year and four months ago when I discovered the Crosszone CZ-1 at CanJam SoCal 2018 so it was a well-anticipated pleasure when one arrived at my front door for review. It arrived as I was setting up office in a new home, so it had to wait until I had my listening room set up, making this is my first review in my new listening room (much cooler and quieter than my old one).

The biggest problem with headphones from an audiophile standpoint is that most recordings are mixed for two-channel loudspeaker playback, while the rise in headphone use may at some point cause the recording industry to switch to producing content specifically for headphone listening, currently even those using binaural recording methods are remixing for two-channel loudspeaker presentation. As a result, with conventional headphones, the soundstage is focused in, and often limited to, the center of your head.

While this is acceptable for many, I mean who doesn’t want to be in the band, the audiophile wants to feel like they are in the room with the band or in the audience listening to the orchestra, as this is the most realistic presentation.

This is the basic motivation of Crosszone, to reproduce that out-of-your-head, three-dimensional soundstage projected by the best of loudspeaker systems. They call this the “External Sound Localization effect”. They achieve this through a combined use of Acoustic Resonance Technology (ART) and Acoustic Delay Cambers (ADC) to achieve a natural and spatial sound field. In a conventional loudspeaker system there are three signal pathways that combine to create the illusion of three dimensions of sound:

To recreate these signal paths the Crosszone CZ-1 employs two drivers, a 23mm tweeter and 40mm woofer, for the direct signal, with an additional 40mm driver for the crosstalk and produces the rear wall reflections and timing corrections using acoustical chambers.

Crosszone CZ-1arrived packaged in a Black satin-lined padded box within an outer picture box and included two separate 8 core twisted structure OFC headphone cables; a 3.5 meter cable terminated with a ¼” single-ended TRS connector and a 1.5 meter cable terminated with a 3.5mm single-ended TRS connector with a screw-on ¼” single-ended TRS adaptor, along with the obligatory instruction manual and warranty card. The connections on the headphone side are standard 3.5mm TRRS connectors so obtaining aftermarket cables should you choose should not be too difficult though you would need to consult Crosszone for the pinout. The TRRS design makes connection straight forward as it doesn’t matter which cup you plug the cable into as both receive right and left channel information.

The ear cups of the Crosszone CZ-1are an attractive triangular shape to accommodate the three driver configuration and the sturdy headband is constructed from die-cast magnesium meaning it is light, comfortable and durable. Equipped with telescoping headband extensions, dual sprung hinges and vertical as well as horizontal pivot points the Crosszone CZ-1can easily be fitted to the head for long hours of fatigue-free listening.

Overall, the Crosszone CZ-1 exhibits the aesthetics and build quality that has become synonymous with the phrase “Made in Japan”.

Living With The Crosszone CZ-1:

Initially, I chose the short 3.5mm cable for burn-in using the FiiO X7 Mark II as source and in turn used the Crosszone CZ-1 with the longer cable to burn-in the ifi Pro iDSD, assuring that both cables were adequate to the task of this review.

Hence I began my listening sessions with the ifi Pro iDSD and Qobuz via the built-in streaming controlled by the MUZO app installed on the X7 Mark II. After sampling several songs I pulled up “Downwind” (16/44.1kHz) by Pierre Moerlen’s Gong. This is a percussion-heavy song with focus on tubular bells, vibes, and marimba, featuring Mike Oldfield on guitar, Terry Oldfield on flute, Didier Malherbe on saxophone and Steve Winwood on keyboards. The first thing to stand out was that the percussion was crisp, lively, and extremely musical. The plethora of overlapping intermingled instruments created a totally immersive experience with the bells floating around me in a three-dimensional sound field. The soundstage was large but intimate creating an in-studio feel.

Switching to the Questyle Audio CMA400i for a source I was more familiar with I put on Uriah Heep and “Look at Yourself” (“Look at Yourself” – DSD). Again I was impressed with the dynamics and the snap of the percussion as well as the overall musicality of the presentation. It was neither veiled nor harsh, putting the Crosszone CZ-1 sonically on a par with the best dynamic headphones I have listened to. There was no obvious crossover for the main drivers with the midbass and midrange performing well. As before, the introduction of rear wall reflection and crosstalk created an externalized soundstage.

This was only reinforced by the following track on my playlist “On Any Other Day” (DSD) by The Police from “Regatta de Blanc”. Stewart Copeland’s drums had real snap as did Andy Summers’ choppy guitar work. And Stewart’s vocal was clear and warm backed by Sting’s fast-paced and deep bass guitar.

It was time to break out my reference system the Questyle CAS192 Current Mode DAC and CMA800R Current Mode Headphone Amplifier and listen to Robert Shaw and the Atlanta Symphony Orchestra’s rendition of Stravinsky’s “The Firebird Suite” (“Stravinsky: The Firebird; Borodin: Music from Prince Igor”) to get the total picture of the Crosszone CZ-1’s soundstage. I began with the 24/96kHz vinyl rip to maximize resolution, and though the sound was quite extraordinary, like many headphones the CZ-1 brought out the vinyl noise so I switched to the 16/44.1 version. Following the Crosszone guidelines, I wore the CZ1s as far forward as possible, yet I didn’t quite get the center focus and depth of field I was hoping for, but that being said, the soundstage was huge, with more of a bright hall presentation rather than a bowl, due in part I am sure to the rear wall reflection and a certain warmth to the bottom end.

Swapping out the long cable for the short one with the adaptor, I repeated the above experiment to see if there was a noticeable difference in the cable performance. Once again I was impressed by the resolution of the dynamic drivers and the seamlessness of the crossover as well as the overall musicality of the headphone.

As with any headphone that comes equipped with a 3.5mm connection, I felt obligated to test smartphone performance with the Crosszone CZ-1, this meant breaking out the old Samsung J3 as the Essential like many modern phones doesn’t have a built-in DAC/amp for headphone use. Cueing up “Wedding List” from Kate Bush’s “Never for Ever” (24/44.1kHz) on Qobuz, despite having to turn the volume all the way up, I found the bass response to be extremely strong, the piano rich and full, with it easy to delineate the Rhodes piano from the acoustic piano, and pick out and identify the myriad of different instruments. Kate’s many separate voices floated ethereally around my head.

Returning to the beginning, though this time opting for the FiiO M11, in tribute to having recently watched the latest Toho/Legendary film, I put on the live version of Blue Oyster Cult’s “Godzilla”. I was quickly transported to 1979 Long Beach Arena where I saw it performed in person. I could almost picture the 100 foot tall Godzilla and the laser show as I stood among the thralling crowds, the distant walls of the huge auditorium reflecting the sound back at me.

Conclusions on the Crosszone CZ-1:

The Crosszone CZ-1 headphone has what I think of as a very popular tonal balance, very neutral through the mid-bass, midrange, and highs, with a slight warmth on the bottom end, not enough to be boomy but a little bit of emphasis to make modern music stand up and take notice. Furthermore, the midrange is distortion-free and what I would call forgiving, meaning you can play low-resolution sources without any noticeable listening fatigue, yet, possibly due to the multi-driver configuration, the resolution is excellent for a dynamic headphone allowing it to scale up to higher resolution sources. Though the top end is a little brighter than I prefer, the forgiving nature of the CZ-1 makes this less of an issue than other headphones.

The soundstage is epic, this due in part to the basic design and goals of Crosszone. The out-of-your-head image is fully realized setting the Crosszone CZ-1 apart with few rivals. Will it replace a two-channel loudspeaker system? For me, no, but it does make living with headphones much easier until such time that binaural recordings become the standard rather than the occasional freak showpiece.