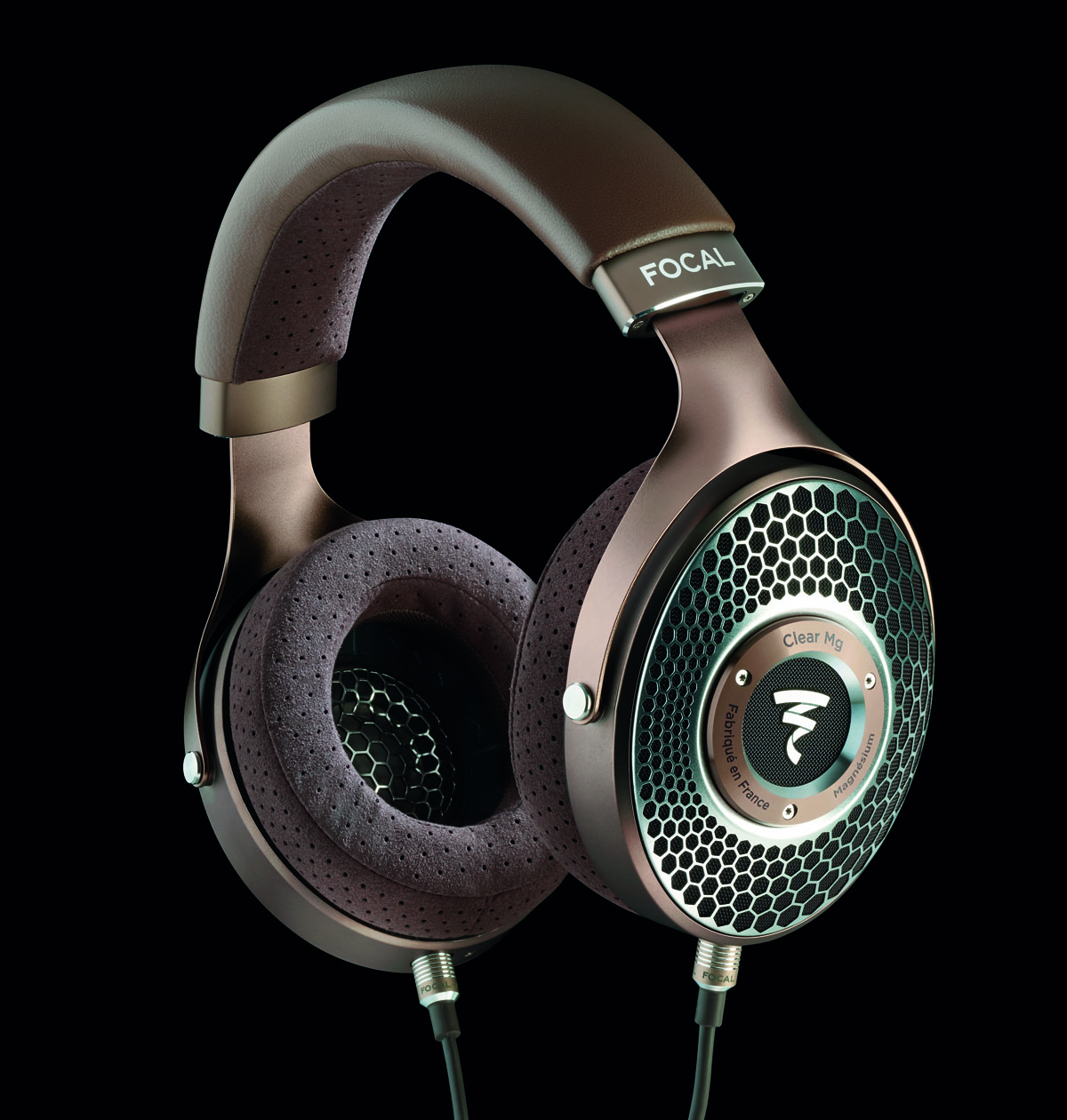 Probably the hottest dynamic headphone manufacturer right now is Focal, which is understandable given that most headphone manufacturers are specialty boutique companies focused on Personal Audio whereas Focal is first and foremost a rare-air audiophile speaker company with over fifty years experience producing the top end of drivers and the most respected loudspeakers out there, and while they had some early success with their inexpensive Spirit headphones, didn’t really enter the market in full force until they were able to produce a speaker that matched up with the quality of their famous Utopia Loudspeakers. The latest headphone to benefit from the Utopia Headphone legacy is the Focal Clear Mg, and I have been fortunate enough to have been sent a review sample for my personal critique.

Incorporating exclusive Focal technologies the Clear Mg represents the gold standard in Focal open-back dynamic headphones. Made in France, they are the result of cutting-edge research in acoustics and Focal savoir-faire. Four years in research and development, the drivers employing Focal’s exclusive ‘M’-shaped dome design feature a unique magnesium cone, a material that enables sharp, precise, impactful playback. For even greater precision an ‘M’-shaped grille inside the earcup follows the curves of the speaker driver. The leather and microfibre-covered headband, with a solid aluminum yoke that perfectly hugs the face, follows a smooth curve regardless of head circumference. Perforated microfibre earpads along with the honeycomb design of the earcups’ external grille are designed to not only provide comfort but to contribute to the open sound of the headphone. A Chestnut and Mixed-Metals finish give the Clear Mg a distinct and beautiful appearance.

To complete the package, the Clear Mg comes with both a single-ended TRS cable and a balanced 4-pin XLR cable along with a rigid woven carrying case colored to match the headphone.

As one would expect with a product of this caliber the Focal Clear Mg Headphones arrived in a very elegant package. The sleek black display box was encased in an outer shipping box with adequate foam packing to protect the inner box from damage. Inside that were the woven carrying case containing the headphones and a fold-out box containing the cables and documentation.

I burned in the Clear Mg using the Questyle CMA Fifteen with my FiiO M11 DAP used as source via Bluetooth. Focal recommends a minimum 24 hours burn-in but as is my custom I ran it for over 100 hours before any testing was performed. As a result, I performed my first listening sessions of the Clear Mg through the CMA Fifteen and my initial impressions were of a dynamic, bassy headphone, with excellent detail and musicality.

For my serious sound checks, I began with my iFi Pro iDSD in tube mode via the balanced output in low gain with a Cardas Iridium Power cable connected to a Core Power Technologies AV Equi=Core 1000 and a Cardas Clear USB cable. Cueing up Joni Mitchell’s “Archives, Vol. 2: The Reprise Years (1968-1971)” (24-bit/44.1kHz) on Qobuz. This collection of old demo recordings came across with a rich full-bodied guitar backing Joni’s vocal with that slightly distant soundstage of a live acoustic recording.

To get a better sense of the tonal balance of the Clear Mg I switched to one of my standard test tracks “Can-utility And The Coastliners” from Genesis’ “Foxtrot” (DSD) album. It opened in a large airy soundstage with a fairly neutral timbre of the mids and highs. When the bass kicked in, it was with great authority and weight though not boomy as is often the case with open-backed headphones. Overall the presentation was slightly dark but musical. For a quick comparison, I switched the iDSD to solid-state mode and this actually opened up the sound a bit, revealing the exceptionally forgiving nature of the Clear Mg.

Stepping up to the new ampsandsound Kenzie OG Rev 2 (review pending) with the Audio-gd R2R-1 via single-ended Cardas Iridium interconnects, I swapped out the balanced headphone cable for the single-ended and sensing that live music would make the Clear Mg really sing selected Jefferson Airplane’s Woodstock performance of “Eskimo Blue Day” (“Woodstock Two” – 16-bit/44.1kHz) and I was on stage with Grace, Marty, Paul, Jorma, Jack, Nicky, and Spencer. Jack Casady’s bass was solid and resonant on the right side of the stage, while Nick Hopkins’ piano stage right and slightly behind had a distinct honky-tonk vibe blending in with Paul Kantner’s guitar as to be almost hidden escaping from the fog during the ending solo jam. Jorma Kaukonen’s lead guitar had real bite without any harshness and Spencer Dryden’s drums had real thump and impact while Grace Slick’s vocal was heart-rending and emotional.

“And You And I — I. Cord of Life, II. Eclipse, III. The Preacher the Teacher, IV. Apocalypse” by Yes (“Close to the Edge” – DSD) is one of my favorite test tracks because it hits the full spectrum, multiple acoustical guitars, triangles, subsonic bass, syncopated harmonic vocal, epic dynamics from almost silent solo tracks, to full crescendos, and a huge though mostly artificial soundstage. The combination of the Kenzie and the R2R-1 with the Clear Mg brought out the best in this song, with a true in-studio presentation and thunderous bass, rich guitars, yet clear highs and liquid vocals. I can’t see this as being other than what the band had envisioned when they carefully crafted this artistic masterpiece. There is a little trill at the end of the first break where Rick Wakeman runs his synth deep into the subsonic and the Focals captured it all. And the power of Chris Squire plucking the bass strings with his pick expressing the essence of the Rotosound tonality. I could easily identify at least five different voices during the first transition.

Moving up to my reference amplifier the Manley Absolute Headphone Amplifier I returned to the balanced cable even though I would be listening in single-ended for the added cable length. For orchestral music, I decided to pick something a bit different and went for “What a Wonderful World” as performed by Louis Armstrong (“What A Wonderful World (Single Version)” – 24-bit/192kHz). It was obvious that the Clear Mg was much happier with higher-end electronics. The expansive soundstage has each instrument solidly in its place, with the strings, woodwinds, and vibes on the right and the guitars (2), xylophone, contrabass, drums, and horns on the left with the choir center stage behind Louis, only the flute moves as it wanders from left to right during its solo.

Vocal reproduction appears to be one of the Clear Mg’s true strong points as evidenced by listening to the Persuasion perform “Imagine” (“The Persuasions Sing The Beatles” – DSD), the definitive acapella version of the song recorded fifteen years before the Pentatonix cover. Sweet and velvety is the best way to describe the Clear Mg’s rendering of the male voice.

To balance the scales I countered the Persuasions with Dusty Springfield singing Burt Bacharach’s “The Look of Love” from “Casino Royale” (24-bit/192kHz) backed by the incomparable Herb Alpert and the Tijuana Brass. Honey, silk, and romance, gently intimate and personal. The counterpoint between the piano and the saxophone transitioning into Herb’s trumpet and the orchestra is chilling.

It is plain to see why Focal headphones are so popular, as the Focal Clear Mg undeniably demonstrates, a bass lover’s dream yet dynamic and articulate. Extremely forgiving of source, yet audibly improved with better electronics despite fairly slight power demands. For rock fans, live music is the correct niche for the Clear Mg creating an in-person experience. They also traveled well with jazz, classical, pop, and acapella. While not quite a one-size-fits-all for all music styles, where it works, it is unbeatable, doing what dynamic headphones do best.

Without question, the Clear Mg lives up to its audiophile heritage, and gives props to the Focal name, being one of the best sounding dynamic headphones in its price range. Kudos to Focal, another epic product.