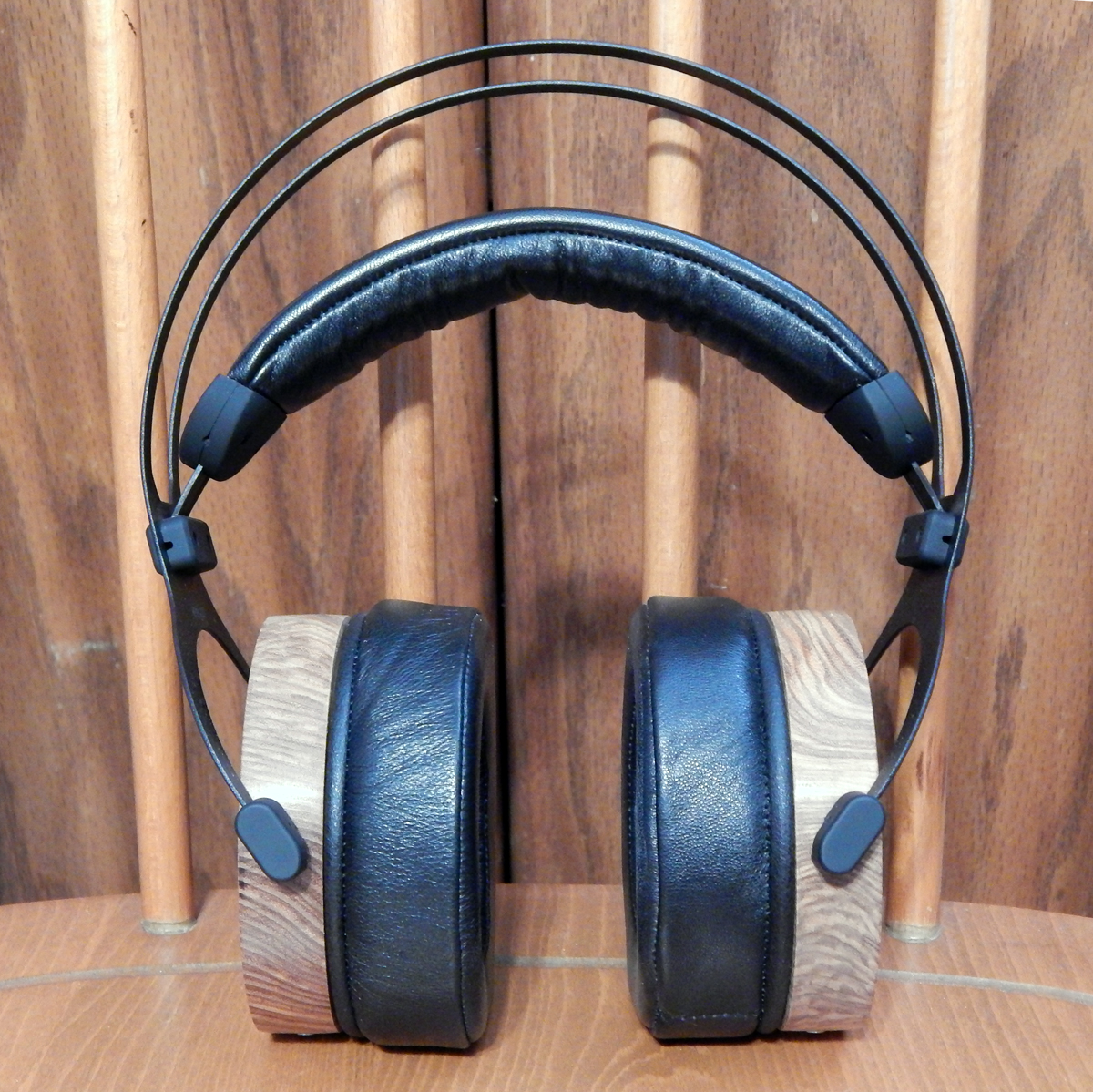 The LSA HP-2 Ultra Horn Loaded Headphone story is twofold. First, it starts with LSA, Living Sounds Audio, which was founded in 2006 by a group of musicians and music lovers with the stated goal, “to offer beautiful sound in a beautiful package while avoiding the farthest reaches of the price spectrum.” Their approach to this goal is a rather old school one of properly matching quality components via extensive listening, in other words, they do it by ear.

5 years ago, Walter Liederman of Underwood Hifi bought the company with the goal of introducing a new upgraded line of state of the art Internet-Direct speakers, which was realized last year to very good reviews. In 2019, Walter’s biggest line, PS Audio went factory direct, so to control his own future destiny, Walter decided to bring out a full line of LSA products. These will include power amplifiers, DACs, music streamers, phono stages, integrated amps, turntables, headphones, and headphone amplifiers which will all be sold at Internet-Direct prices with no dealer profits.

When it came time to expand their extensive loudspeaker and electronics catalog to include headphones (the first of these new products to be brought to market), they began with what was already recognized as an amazing headphone and refined it to their particular tastes, which brings us to the second part of the HP-2 Ultra story, Kennerton.

Kennerton is a luxury brand of Fischer Audio founded as a reaction to what they saw as an ever diminishing quality of sound offered in fancy packages by famous manufacturers for ever-increasing prices in the world of high-end headphones. In response, Kennerton has dedicated themselves to producing the pinnacle of sound by “making every effort to reveal the potential of each model and optimize every detail to find the best balance between price and quality.”

LSA’s new HP-2 Ultra is an upgrade to the Kennerton Magni that will be released from Kennerton as the Kennerton Gjallarhorn (at a $1200.00 retail price in comparison to the HP-2 Ultra at $799.00) that LSA is positioning to be a breakthrough in an affordable under $1000 headphones.

Using a unique new horn loaded 50 mm compression design driver with a bio-cellulose and paper membrane the HP-2 Ultra has an extremely soft suspension and additionally relies on the elasticity of the air volume of the acoustic chamber, represented by the earphone cup. This is done to lower the resonant frequency of the dynamics, and accordingly the depth of reproduced low frequencies. As a result the HP-2 Ultra headphone represents an easy to drive 33-ohm load with a 105dB/mW efficiency.

To maximize comfort and reliability the LP-2 Ultra uses a steel headband with a minimum of moving parts. The headphone cups are made of real wood which brings warm and natural notes to the sound of the headphones, eliminating the intrusive “plastic” overtones of many competitors’ models. A lightweight, self-adapting design with genuine leather ear cushions provides comfort for long-term listening.

In appearance, the LP-2 Ultra has a simple round wood cup with an elegant darker wood inset for a very handsome look complemented by the black headband and earcups. The cable is nylon-wrapped for durability and employs dual-standard 3.5mm TRS connectors so aftermarket cables for those who prefer a 4 pin ‘balanced’ design should be a breeze. Included is a nice eco-leather case for safe storing and carrying of the headphones.

Our good friend Walter Liederman owner of Underwood HiFi was kind enough to send me a pair of LSA HP-2 for review which I am led to believe will be made subject of a future Headphone.Guru giveaway (so keep tuned to our Facebook Page Here). LSA recommends 75 – 100 hours of break-in before serious listening, which is my normal modus operandi anyway, so I switched my iFi Pro iDSD to solid-state mode and launched Qobuz (using the MUZO Player app, running on my  FiiO X7mkII as controller to stream Qobuz through the iDSD directly) selecting my second 1000 song playlist (funny enough one 1000 song playlist wasn’t enough to keep it from becoming repetitive) and left it to run for a few days.

Switching back to tube mode on the iDSD I began my serious listening test with a little Tony Williams Lifetime on Qobuz playing selected tracks from their “Believe It” (16-bit/44.1kHz). My first impression was of extreme speed for a dynamic headphone and a neutral tonal balance with a very live bottom end. The timbre of the instruments was excellent and the clarity laudable. The soundstage was open but not overly large.

Before moving on from Qobuz I always like to sample new music so I selected the album “Meryem” by Meryem Aboulouafa (24-bit/44.1kHz). On “Breath of Rome” the HP-2 Ultras began to exhibit that “larger than life” feel that is often associated with horn speakers. The soundstage of “Say the Truth and Run” had a vast expansive touch as if recorded in a large church.

It was time to move to more familiar ground choosing songs from the micro SD card installed in the iDSD. The piano on “A Cold Old Worried Lady” by Triumvirat (“Old Loves Die Hard” – 16-bit/44.1kHz) was spritely and rich with a definite Steinway in a vast auditorium timbre. Barry Palmer’s voice was clear, emotional, and heartfelt even against the full orchestra crescendos.

Putting on “And You And I — I. Cord of Life, II. Eclipse, III. The Preacher the Teacher, IV. Apocalypse” (Yes – “Close to the Edge” – DSD) to get a feel for higher resolution performance I was pleased to hear how low the bass extended without any boominess. In fact, there was a clarity and purity throughout the spectrum that took full advantage of higher resolution sources bringing out instruments that normally would be lost in the cacophony of sound. Vocals had a natural in-room feel despite the large hall soundstage, as did the acoustic guitars. Paramount over all was the dynamic range, which as one would expect was enhanced by the horn design of the HP-2 Ultra.

The low bass extension was further reinforced by listening to my standard subsonic bass test of  “Non Mi Lasciare” by Dario Baldan Bembo  (16-bit/44.1kHz). While the operatic vocals were presented with intimacy and emotion, the LSAs did exhibit a little of the graininess that is inherent in the lower resolution recording which is probably a byproduct of the combination of speed and dynamic range.

The apparent preference of the HP-2 Ultra for higher resolution recordings led me to choose the Eiji Oue/Minnesota Orchestra performance of “The Firebird Suite” (DSD) for what is a true torture test for horn-loaded speakers, full orchestra. Horn-loaded speakers have a tendency to slightly distort strings and woodwinds making them sound a bit like, well, horns, especially solo instruments, and I was very pleased to discover that the HP-2 Ultra did not suffer from this deficiency. Contrarily, with their extreme dynamic range and large soundstage, they appear to be perfect made for classical music. Not only that, their lightening speed, gave real texture to the timpani and bass drum whacks and the uniformity of tonality was such that there was no drift whatsoever in the image, solidly placing each instrument in a defined space.

Sensing that the LSA’s real niche would be live music I cued up “Joe Hill” as performed by Joan Baez at “Woodstock” (24-bit/192kHz), it was like being at the edge of the stage, again clear and rich and especially, dynamic. This held true for Canned Heat’s “Going Up The Country” from the same recording.

A test of the LSA Hp-2 Ultra would not be complete without a little acoustic jazz with real horns, so I choose the man himself Miles Davis and “So What” from “Kind of Blue” (24-bit/192kHz), and to step up the challenge a notch, I broke out my ¼” TRS to 3.5mm TRS adaptor and switched to my Questyle QP2R DAP though the headphone was clearly not intended for portable use. Running on “low gain” I set the volume to about halfway and hit play. My first impression was that for the first time I could hear the spittle rattle in Mile’s trumpet for what it was. Though the upright bass cello was a bit more present than one would expect, the sweetness of the horns was magical, and the playback of this track was probably the richest and most musical I have ever heard it.

The good and the bad: The auto headband adjustment worked flawlessly and was always comfortable and did not drift (a problem I have experience with some headphones that have manual adjustments). Though the soundstage is huge, it is a headphone soundstage, IE: centered in your head. If I were to give suggestion to LSA it would be to offer a tapered earpad to create a more three-dimensional soundstage (though I don’t know if that would be practical with their headband design and it would probably affect the voicing of the headphone which would also require study). Secondly, the headband is a bit microphonic, though this should not be an issue as long as you don’t touch it while listening. Lastly, though they clearly don’t need the extra power, an option of a 4.4mm TRRS cable would be great for those using equipment designed for such.

I’ll admit that I was skeptical about a horn-loaded headphone as horn loudspeakers tend to color the music, but not so with the LSA HP-2 Ultra Horn Loaded Headphone, in fact the HP-2 Ultra turned out to be one of the best sounding dynamic headphones I have heard. Fast and dynamic, though the HP-2 is a little hot on the bottom end they are neither boomy nor muffled, as it happens, their clarity of midrange is their most notable characteristic. They are what I think of as a fun headphone, they work well with all forms of music from House to Classical and I would recommend them to fans of any style and genre of music, not something I can often say. While they are revealing of the flaws in your source material they are not analytical but rather musical, not exactly honeyed or smooth, but pristine with no added edges.

They are a headphone fan’s headphone. They offer a vast soundstage with laser-etched imaging, but you are in the center of the orchestra, not in the audience, I would guess they would be phenomenal for listening to film soundtracks as they easily create that larger-than-life experience.

The build quality is top-flight while the design is simple and elegant, and communicates the look and feel of a much more expensive product. To add to their extreme value, they can probably be driven by pretty much any source, with the above caveat that they are intensely revealing and give you exactly what you put in.

I would again like to thank Walter Liederman and Underwood HiFi for the opportunity to test out these fantastic headphones, and point out that he is currently offering them at an introductory discount price of $749, a definite two thumbs up.