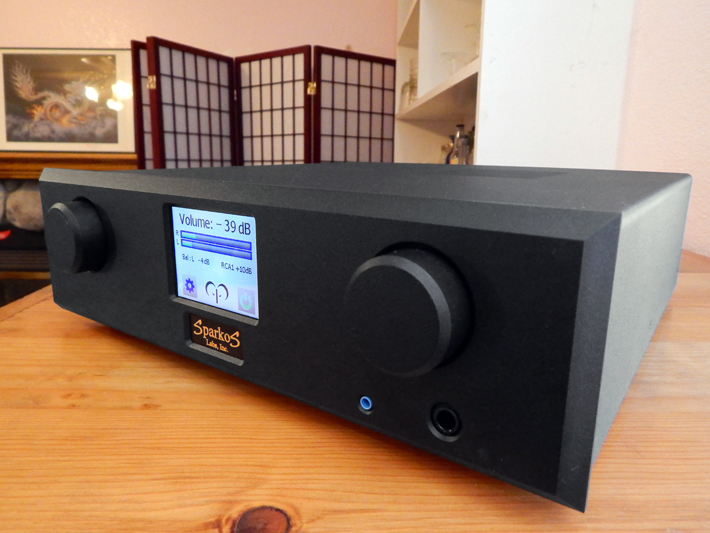 When I met with Andrew Sparks at RMAF 2019 the SparkoS name seemed to have a certain familiarity, which it may indeed have for do-it-yourselfers as their primary products are custom discrete Op-Amps, Voltage Regulators and sundry other tiny circuits on tiny sandwiched circuit boards. The company’s story (which can be best summed up in the video below), along with the tag line “Audio Perfection From DC to Dog Whistle” and the stated 130 dB noise floor made me immediately line up to review the SparkoS Labs Aries Headphone Amplifier.

As one would expect, the SparkoS Labs Aries Headphone Amplifier is assembled with a judicious and healthy smattering of SparkoS Labs discrete Op-Amps and Voltage Regulators.

The main audio path consists of two pairs of SparkoS Labs SS2590 discrete op-amps with a 64 step (1dB per step) relay-switched stepped-attenuator in-between them. SparkoS Labs SS3601 and SS3602 discrete op-amps handle the XLR inputs and drive the preamp outputs.  There are also no capacitors in the signal path, potential DC offsets being handled by DC servo.  A Mu Metal shielded toroidal power transformer is employed regulated by a pair of SparkoS Labs discrete voltage regulators to ensure extremely low magnetic field pick up and hum. Likewise, the stepped attenuator was opted for in order to maintain a fixed output impedance thus lowering noise and providing more accurate channel balance.

Feature-wise, the SparkoS Labs Aries has both single-ended (RCA) and balanced (XLR) inputs and preamp outputs, though the amplifier itself is single-ended throughout (creating a unique situation where single-ended input may, in fact, have a lower noise floor due to the additional circuitry required to accommodate the balanced inputs, because of this, I agreed to test using both as this is primarily subject to environmental issues). There is also a 3.5mm TRS single-ended input on the front panel making for a total of four selectable inputs, three single-ended and one balanced.

The user-configurable touch screen display on the front (which also acts as your power switch) allows you to adjust the background and foreground colors using RGB sliders along with separate backlight intensity control, as well as, three steps of gain (+10dB, +20dB, and +30dB) and the ability to switch between the two front-panel knobs for volume and balance.

Finally, the headphone amplifier has a single ¼” single-ended headphone jack on the front panel. The overall visual impression is one of quality and modernity with an eye towards simple functionality in basic black.

I received the SparkoS Labs Aries a little over a month after RMAF and set it to burning in with my FiiO X7mkII DAP as source. In turn, I used the Aries to burn in my new HiFiMan HE6se Planar Magnetic Headphones which I acquired specifically to test the SparkoS and other amplifiers because they are well known for being impossible to drive and because they are one of Frank’s favorite headphones, which means they sound great.

What little I heard during the burn-in was truly impressive, especially considering I was able to get excellent volume using the mid gain setting.

Following burn-in, it was time to connect the iFi PRO iDSD 4.4, which I did via both single-ended and balanced, and go to town. Since noise floor was a major consideration here, I began my testing in the solid-state mode of the iFi.

Pulling up Celebrity Skin’s epic cover of ABBA’s “S.O.S.” on Qobuz (16/44.1kHz), my first impression of the HiFiMan HE6se / SparkoS Labs Aries combination was “Tight!” The percussion was crisp and the bass incredibly well controlled, with an unexpected linearity and bass extension that I have only heard in closed headphones rivaling my beloved MrSpeakers ETHER C Flow 1.1 Planar Magnetic Headphones. The soundstage was extremely wide offering a stage-edge live-music feel. And the dynamic range was skin blistering even set to the mid gain setting. The guitars had razor-edge sharpness and detail with rich musicality and the clarity of vocals was remarkable.

I also verified to my surprise that the single-ended inputs were indeed quieter than the balanced.

Switching to my standard test tracks for more serious listening, I cued up “The Look Of Love” (“Casino Royale” – Burt Bacharach/Dusty Springfield/Herb Alpert and the Tijuana Brass – 24/190kHz) and that same intimate stage-side in a huge empty Las Vegas-style night club presentation was evident. The piano had a lidded stage grand piano richness with all the damping and speed that that implies. Like the piano, there was unamplified acoustic tonality to the upright bass, drums, and horns evoking a realism that was exemplified by the saxophone solo as well as Dusty’s lush vocal.

Cranking back the gain to the low setting and plugging in the ETHER C Flows I confirmed what I had heard so far with a slightly narrower but deeper soundstage. I selected “Can-Utility and the Coastliners” (“Foxtrot” – Genesis – 16/44.1kHz) to explore the bass extension and control which proved to be among the best I have heard.

It was at this point that I moved over to the tube output on the PRO iDSD. Repeating the previous test I was rewarded with a larger soundstage and a slightly more musical experience though the tube noise was only barely masked by the tape noise from the original recording. I followed this up with another analog recording The Moody Blues’ “Never Comes The Day” (“On The Threshold Of A Dream”) rendered just a bit more analog by having been packaged as a DSD file. Immersed in another vast soundstage it was hard to imagine that all of this presence of the multiple melodic instruments could be contained within a studio.

Opting for the higher resolution at the cost of a warmer bottom end, I used the MrSpeakers ETHER2  Orthodynamic Headphones for “The Firebird Suite” as performed by Eiji Oue and the Minnesota Orchestra (“Stravinsky” – DSD). The soundstage was as large as I have ever heard it without artificial enhancement and the image was as focused as I have experienced both speaking volumes about extreme linear bandwidth and dynamic range, with the noise floor well below the base noise floor of the recording. For the first time I felt the ETHER2 could truly stand toe to toe with electrostatic headphones in resolution while competing favorably with dynamic headphones in impact.

With that in mind, it was probably time to give my reference dynamic headphones the Spirit Torino Twin Pulse Isobaric Open Circumaural Headphone their day in the sun. Putting on Jimi Hendrix’s “Woodstock Two” performance of “Jam Back at the House” (16/44.1kHz) the realism was unbelievable. I could clearly hear the microphone feedback as Jimi blazed through this classic instrumental. It was front row vibe and excitement all the way, it wasn’t like listening to headphones at all, but like sitting there in the mud staring up at the artists on the stage. No reservation, and it was clear that neither amplifier or headphone were giving it their all, that I could easily increase the volume to the point where my ears would be ringing like at a real concert, but I have my limits.

Because, as I stated at the start of this article, noise floor is a big factor in this amplifier, I broke out my Noble Katanas to see how low it was. To give an example of how efficient the Katanas are, with the amp in low gain and the volume all the way down (-53 dB according to the front panel readout), I could clearly hear the music coming through at low background music levels. With the music paused it was dead silent, in fact, there was no audible difference between when the amp was on and off. Kicking off “Karn Evil 9 – Third Impression” (Emerson, Lake & Palmer – “Brain Salad Surgery” – 24/96kHz) I established that loud listening level was -25 dB on the front panel. The engagement was palpable. To complete my noise floor tests, I once again paused the music and the noise floor of the iDSD became overtly noticeable at -20 dB, which specs out at -115 dB so the claimed 130 dB noise floor of the Aries is quite believable.

The SparkoS Labs Aries Headphone Amplifier far outperformed expectations and is one of the most musical solid-state headphone amplifiers I have heard and not artificially so (through rolling off the highs or compromising tonality, timbre, and detail). In fact, I would almost be willing to remove the “solid-state” caveat, and everyone knows I am a tube guy (though not for the reasons most people would suppose, a proper tube amp should have the same linearity of tonal balance that a solid-state amplifier does). It clearly has the ability to easily drive any headphone short of an electrostatic or ribbon headphone which require special purpose-built amplifiers.

The SparkoS Labs Aries does what an amplifier is supposed to do, it gets out of the way of the music and simply amplifies, drawing the maximum performance in dynamic range and tonality that the headphone is capable of. Definite thumbs up and hearty recommendation.