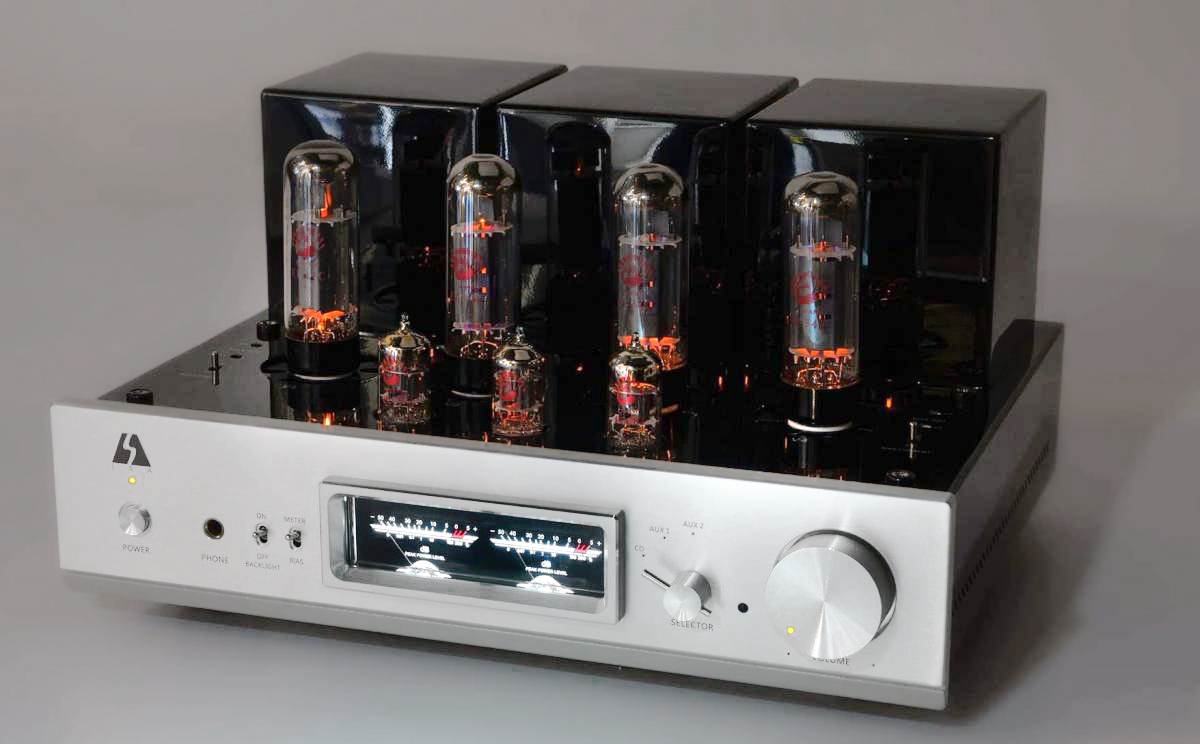 This is one half of a two-part article, the other half can be found Here on our sister site HiFiAudio.Guru. Over the last few years after our good friend Walter Liederman took over control of LSA (Living Sounds Audio), LSA has introduced a host of amazing new products for both the Loudspeaker and Headphone market the latest of which is the LSA VT-70 Tube Integrated Stereo Amplifier/Headphone Amplifier. Having recently reviewed their LSA Discovery Warp One Stereo Amplifier and being a huge fan of tube amps, I was more than pleased to find out I would be given the opportunity to listen to and review the VT-70.

The LSA VT-70 Tube Integrated Stereo Amplifier/Headphone Amplifier is a classic Ultralinear Class AB 35 Watt per channel tube amp, featuring four EL34 tubes (6550s or KT88s are also supported for those who like to tube roll) with a pair of 12AU7s and one 12AX7 on the front end. A quick look inside shows that it is a blend of old vs. new with a balance of modern circuit boards and point to point wiring, which has the advantage of reducing production costs while maintaining sonic integrity, which is why the VT-70 can be offered at a fraction of the cost of other similar designs as well as the fact that it is sold Internet Direct.

Appearance-wise it is simply gorgeous, with a piano black chassis, transformer covers, and tube cage, and a brushed aluminum faceplate and knobs, alongside chromed toggle switches, plus dual VU meters set in the center. Secured by banana plug style fasteners, the tube cage is easily removed to reveal ceramic tube sockets and the easily accessible bias adjustments. To make tube rolling a breeze, the VU meters double as bias adjustment meters as well as power meters. The tubes included in my unit were LSA branded so I cannot speak as to their provenance, but swapping out for NOS tubes of your choice can only make a great thing better. At some future date, I will probably swap out the EL34s for a set of KT88s and do a follow-up review.

For layout, on the front panel you have (left to right facing the front panel) the power button (with a power LED directly above), a ¼” TRS headphone jack, a backlight switch (On/Off), a meter switch (Meter [VU]/Bias), the VU meters, the Selector knob (CD/Aux 1/Aux 2) which interestingly has a metal bar through it as indicator, the IR receiver, and the Volume control (with an LED inset as indicator). On the top, you have the three input tubes in the front row, then the power tubes behind that with the bias meter switches and ports to reach the bias controls to the right and left of those, and in the back the three transformer blocks. On the back (left to right facing the rear panel) you have the three single-ended RCA inputs (CD, Aux 1, Aux 2), the single-ended RCA preamp output (note: this is meant for use with a self-amplified subwoofer with its own built-in crossover, there is no crossover and the VT-70 is not meant to be used as a preamp and needs to be connected to speakers or headphones while in operation.), the speaker outputs (five-way binding posts with separate taps for 8 Ω or 4Ω), a 110/220 input voltage switch, and the power receptacle.  For accessories, the VT-70 includes a remote control with a metal housing (volume and mute only).

To perform my listening tests of the LSA VT-70 Tube Integrated Stereo Amplifier/Headphone Amplifier I used my Audio-gd R2R-1 DAC as source, powered by a Core Power Technologies A/V Equi=Core 1000, and for cabling Cardas Iridium single-ended RCA interconnects, Cardas Iridium power cords, and a Cardas Clear USB cable. LSA recommends letting the amplifier warm up for about half an hour before listening for best results. This may seem like a long time, but truth is solid-state amps can take several days to reach full operating temp, for this reason, the amplifier that is now running my AV system has only been powered off during the last 40 years, for moves, system changes, and power outages. One further step I went through before doing any serious listening was to re-bias the tubes. While strictly not necessary as this was done at the factory, tubes can change over time, and environmental factors, as well as the effects of shipping, can cause this to change. As it turned out, the bias was a little high, not critically so, but worth noting. Due to space considerations, I set up the VT-70 on the far side of my desk facing away from me, so the remote control came in real handy.

To establish a baseline, and to determine if the VT-70 was going to compete as a $1,200 headphone amplifier, I began with my hardest to drive headphones, one of the all-time hardest to drive, short of the original model of the same headphone, the HiFiMan HE6se Orthodynamic Open-Back headphones.

Striking up Qobuz I selected “J. S. Bach: Matthäus-Passion BWV 244” (24-bit/96kHz – Qobuz) as performed by Pygmalion and Raphaël Pichon. I could tell instantly that this was going to be a magical experience. The timbre and tonal balance were so natural that it was hard to even note it as such. The strings were rich and full, reaching deep into the bass, while the woodwinds were light and airy. The expansive soundstage exhibited remarkable pinpoint imaging, permitting one to identify individual singers in the choir. As to dynamic range, the VT-70 was easily able to drive the HE6ses to live venue levels at only a third volume, with plenty of headroom to spare, which says a lot as most amplifiers need to run at near full volume to peak out the HE6ses.

Next I went for Jenny Hval’s “Classic Objects” (24-bit/96kHz – Qobuz), again the soundstage was massive and ethereal, the bass was tight and strong with velvety vocals and crisp guitar backed up by lush B-3 organ and crystal percussion. As the multitude of instrumentality and overlapping vocals built up, the detail and resolution were epic as was the musicality of the experience, drawing one of the best performances from the HE6ses that I have heard.

Picking out another hard-to-drive headphone (for completely different reasons) I plugged in the Spirit Torino Twin Pulse Isobaric Open Circumaural Headphone, which despite using dynamic drivers sucks up power like a sponge, and put on “Buckskin” by Cherokee Rose. Like with the HiFiMan the soundstage was huge and immersive, and the musicality strong, with powerful bass, and sweet honeyed highs.

Switching to my most tonally accurate headphones the Dan Clark Audio ETHER C Flow 1.1 Planar Magnetic Headphones I cued up my test playlist and selected “The Song Is Over” by The Who (“Who’s Next” – DSD) the sound was simply spectacular. Nicky Hopkins’ piano was natural full and rich with a Steinway feel, while John Entwistle’s bass was deep, tight, and thunderous without feeling over-emphasized. Keith Moon’s drums had snap and impact while remaining musical without sizzle or spit, and Pete Townshend’s synth and guitar had that in concert weight and burr. Of course, that tube magic midrange reproduced Roger Daltrey’s vocal with clarity and dynamics without sibilance or harshness. And as with the previous tests, the soundstage was vast and three-dimensional with phenomenal imaging.

Moving up to the Dan Clark Audio ETHER2s for Dusty Springfield singing Burt Bacharach’s “The Look of Love” from “Casino Royale” (24-bit/192kHz) backed by the amazing Herb Alpert and the Tijuana Brass I was completely delighted, with Dusty’s honeyed dulcet tones, and the sense of air in a large night club. The resolution and detail were second to none.

To take a trip in the other direction I plugged in my Dan Clark Audio AEON Flow Open Headphones for a peek into “The Phantom Of The Opera (Original Cast Recording)” (16-bit/44.1kHz) Sarah Brightman performance of “Think Of Me”. It was like being in the audience, dynamic and musical. While not quite as resolute as the other headphones, enjoyable all the same.

As a last test, I chose the $329 HiFiMan DEVA Pro and Tim Curry singing Richard O’Brien’s “I’m Going Home” from “The Rocky Horror Picture Show – Original Soundtrack” and the VT-70 made these relatively inexpensive entry-level headphones produce reference-quality sound. I found myself just listening to this favored track over and over.

Full disclosure, the LSA VT-70 Tube Integrated Stereo Amplifier/Headphone Amplifier is the least expensive pure tube amp I have listened to and it is fantastic. I hear you saying “Is it worth buying a whole integrated amplifier just to use for headphones?” The simple answer is absolutely, though I do recommend hooking up a pair of speakers even if you don’t plan on using them to protect the output tubes and transformers, especially if you use multiple headphones. As to power output, I can’t imagine a pair of headphones that the VT-70 couldn’t drive, worse comes to worst you could just connect the speaker outputs to a breakout box with a headphone jack and drive them that way. I believe the VT-70 would be ideal for a headphone like the RAAL|requisite SR1a that require a converter box or an electrostatic energizer for use with electrostatic headphones.

Furthermore, with its epic soundstage, laser-sharp imaging, deep bass, and linear timbre, along with its incredible musicality regardless of musical choice, the VT-70 is one of the better headphone amplifiers that I have listened to, competing with offerings from other manufacturers at two to three times the price. And that doesn’t even take into consideration its ability to drive Loudspeakers, which will be covered in the other half of this review over at HiFiAudio.Guru. If I needed to go out today and purchase a new reference amplifier for headphones, the VT-70 would very likely be my first choice.

2 year warranty and 6 months on tubes