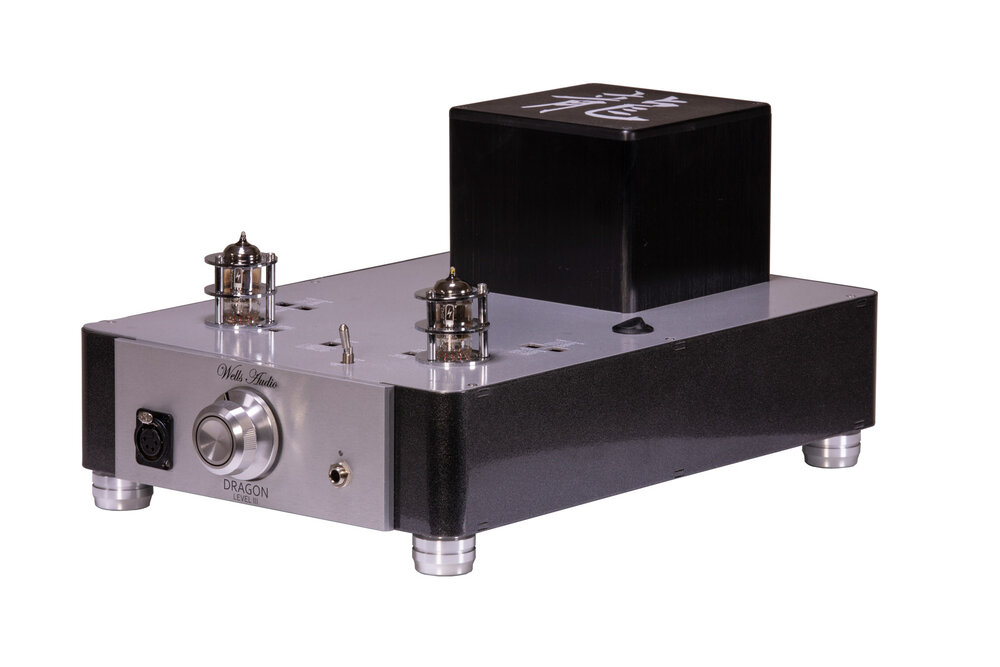 This is actually part one of a two-part review (part two can be found here, why you ask, because there is a certain synergy between a tube amp and a tube DAC which made me want to review the Wells Audio Dragon Level III tube headphone amplifier with the Wells Audio Cipher (tube) DAC, so when Jeff Wells offered to send me the Dragon I asked if I could review the Cipher at the same time.

Most of you are probably aware of Wells Audio’s stellar solid-state amplifiers like the Milo and the Headtrip II but Jeff also has extensive experience with tubes as evidenced by the well-received Wells Audio Commander preamp which was released to rave reviews and has been the centerpiece of many a HiFi Show reference system. Now he has focused that expertise on the Personal Audio world with the introduction of the Wells Audio Dragon Headphone Amplifier.

At its core the Dragon is a tube hybrid amplifier, meaning that it utilizes a tube gain stage and a low noise solid-state output stage giving it the musicality of tubes and the raw current capability of a solid-state (up to a whopping 1 amp current and 5 Watts power output making it able to drive pretty much any headphone). Since flexibility is a Wells watchword the Dragon is designed to run a choice of tubes with multiple gain settings and multiple ground settings to fit the demands of any user, system, and environment.

In order to meet Wells’ exacting standards, each Dragon Headphone Amplifier is painstakingly hand-made in the USA.

Thanks to Wells Audio’s modular design, the Dragon comes in three flavors; Level I, Level II, and Level III, and like all Wells products, those designations reflect real cataloged component upgrades, that make a significant difference in the performance of the amplifier at a cost that very closely reflects the costs of those components.  The feature set of the basic Dragon (Level I) is as follows:

All for an incredibly reasonable $1,500 making it extremely competitive with any audiophile quality American-made headphone amplifier. For the small sum of $1,000, the following is added to the Level II:

And finally, for those who want to experience pull out the stops, flagship quality performance the Level III is additionally fitted with the following:

which brings the total up to $5,500 which is still a bargain when one considers the $30,000 price tag for the fully loaded dual monoblock version of the Headtrip II Level II.

As one would expect from a tube amp, the chassis of the Dragon is a sleek heavy-duty all-steel box with rounded corners and a thick aluminum faceplate, with an aluminum tower at the back encasing the transformer and the tubes rising from the top at the front of the unit. The power switch and tube switch are also located on the top of the unit with the “gain” and “ground setting” accessible through small windows cut into the top. The four-pin XLR balanced and ¼” TRS single-ended outputs are on the front panel along with the centered volume control, and on the back panel are the single-ended (RCA) and balanced (XLR) inputs along with the power receptacle. Like the other Wells Audio products I have tested, the layout appears to be a mirror-imaged dual mono configuration.

As mentioned above, the unit I received for review was the Dragon Level III. Since all three units start with the same base chassis, layout, and components, all three models look pretty much identical with the exception of the aluminum feet, aluminum volume knob, and the chrome tube shields. Tube Amp Doctor (TAD) 12BH7 Premium Selected tubes were fitted to the unit. The “gain” was set to minimum (0dB) and the “ground mode” was set to Resistor + Capacitor.

Starting with my Dan Clark Audio ETHER2 planar magnetic headphones connected via the balanced output and launched Qobuz selecting Nils Frahm’s “Old Friends New Friends” (24-bit/96kHz – Qobuz) from the “New Releases” section. My first impression was of vast space. The second thing I noted was the fact that you could hear the action of the piano keys, their attendant dampers, and the piano pedals, which appears to have been a deliberate choice in the recording setup. The bass keys had a rich deep tone with an almost plucked aspect as if it was being played on an upright bass rather than piano, likewise, the higher keys had a harp-like quality. Again, this was due to the recording technique, but the absolute transparency of the Dragon was clearly apparent in the naturalness of the timbre and the ability to track the transients.

For something a little less experimental I chose “West Side Story (Original Motion Picture Soundtrack)” (16-bit/44.1kHz – Qobuz) from Spielberg’s new film. Once again I experienced that sense of vast space giving the feel of a concert hall as opposed to a studio. The dynamics were intense and the imaging was solid with laser precision placement of the instruments and singers, for all sounding like I was attending a live stage show. To say the sound was musical is to understate the facts.

To check out single-ended performance I moved to my Dan Clark Audio ETHER C Flow 1.1 headphones and my catalog of test tracks I picked out “Can-utility And The Coastliners” (Genesis – “Foxtrot” – DSD) to get a better picture of the tonal balance and subsonic response. The band was up close and personal in a large studio, the sub-bass was solid and meaty while the dynamics and detail were overwhelming. The tonal balance was neutral with a little emphasis on the lower midrange giving the keyboards and percussion definition and impact.

Switching to the hard-to-drive HiFiMan HE6se planar magnetic headphones I put on “Renegade” by Steppenwolf from their “Steppenwolf 7” album (24-bit/192kHz). There was great symmetry between the Dragon and the HE6se, digging out that feeling of space while extracting every nuance without being harsh or bright.

For contrast, I substituted the iFi Pro iDSD DAC and moved to the Spirit Torino Twin Pulse Isobaric Open Circumaural Headphone and cued up Jean-Luc Ponty’s “Mirage” from “Enigmatic Ocean” and experienced a much mellower sound with a reduced yet deeper soundstage. Still, the musicality was fantastic.

As a final test, I put the Cipher back in and gave the Focal Clear Mg open-backed dynamic headphones a run playing Bob Dylan performing “My Back Pages” (“Bob Dylan’s Greatest Hits Volume II” – 24-bit/88.2kHz) and I could picture myself sitting in a large hall listening to the folk-great singing his heart out. The Dragon/Cipher combination proved to be the best match for the Focals of all the gear I listened to them through.

At $10,500 the Wells Audio Dragon Level III Headphone Amplifier coupled with the Wells Audio Cipher Level I DAC is the second most expensive Headphone Amplifier / DAC combination I have had on my desk, the legendary Questyle “Gold Stack” still reigning at $12,500, and things have progressed a lot since then and on almost every front the Wells Audio system offered superior and more musical performance. That is to say, though this is a high budget reference-quality proposition, if you have the resources it is well worth the expense. Music lovers, especially those with hard to drive headphones like the HE6se or the Abyss AB-1266, or as it turns out if you are an especial fan of Focal headphones, are going to want to give the Dragon a listen, and if you want to get the most out of your Dragon you’ll want a Cipher to go with it.